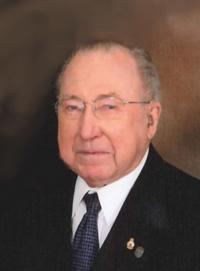 George departed this mortal existence on December 16th, 2013, passing peacefully in his own bed at the Valleyview, where he’d been living contentedly for the past almost two years. George is survived by his son, Bill of Medicine Hat; his son, Ed (Debbie) and their two daughters, Catherine (Chris) and Elizabeth (Michael), all of Edmonton; and his daughter, Janet (Peter) and their two sons, Alex and Andy, all of Calgary; his sister, Gladys; his sister-in-law, Nell Cocks; numerous nephews and nieces; and some cousins in Devonshire, England. George was predeceased by his beloved wife, Margie, on December 10th, 1997. He was also predeceased by his parents, Bill and Charlotte; his brothers and sisters-in-law, Frank (Olive), Jack (Marjorie), and brother, Bob; his mother and father-in-law, Wren and Isabel Mogridge; and his brother and sister-in-law, Bill and Beth Mogridge. George was born on the homestead near Riverhurst, Saskatchewan, on August 26th, 1921. The crucible of the dirty thirties on the prairies formed his initial character which was truly forged during WW2, when he served overseas in England, France and Holland. George always took life as it came, enjoying the good times and enduring the bad with a faithful, courageous and optimistic spirit. He was a faithful husband, caring for Margie after her amputations with a gentle, tireless devotion; a loving father, becoming more friend than parent to his children; and a proud grandfather to his loving grandchildren. George worked in the automotive industry all his life. He was a charter member of the Kinsmen Club, a Mason and Shriner, and an elder of his church. George was known and will always be remembered for his sense of humor, which remained intact to the end, and for being a true friend who enjoyed life in all its aspects. The Funeral Service will be held in ST. JOHN’S PRESBYTERIAN CHURCH, 504 – 2nd Street SE, on Saturday, December 21st, 2013 at 11:00 a.m. with Reverend Dr. Nancy Cocks and Reverend Diane Beach co-officiating. Interment will follow in the Family Plot at Hillside Cemetery. Memorial gifts in George’s memory may be made to the St. John’s Presbyterian Church Memorial Fund, 504 – 2nd Street SE, Medicine Hat, Alberta, T1A 0C5 or to the charity of one’s choice. Condolences may be sent through www.saamis.com or to condolences@saamis.com subject heading George Cocks. Funeral arrangements are entrusted to SAAMIS MEMORIAL FUNERAL CHAPEL AND CREMATORIUM, “The Chapel in the Park”, locally owned and directed. Should you wish any additional information, please telephone (403)528-2599