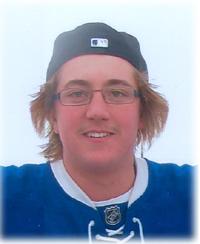 With sadness, the family of Alexander Jacob Graf announce his sudden passing on Tuesday, February, 11, 2014, at the age of 20 years.  Alexander was born December 30, 1993, in Lethbridge, a son to proud parents, Roy and Annette Graf.  Alex was at the young age of 2 when the family moved to Cadotte Lake, AB., to live on the Cree Reservation where his mom got her first teaching position.  In 1997, they moved to Medicine Hat and later in 2009, the family settled into their dream home in Seven Persons.  Alex received all of his schooling in Medicine Hat and graduated from McCoy High School in 2011.  He also attended Medicine Hat College, having taken his first year of Welding in 2013, and currently enrolled for his second year.  At the time of his passing, Alex was employed as a Welder’s helper, apprenticing with Last Chance Welding.  There are so many things we can say about Alex… he was a great friend to many and always worked hard.    His future was in the palm of his hands.  Alex had many plans and he was sure to be successful.  His personality was one of a kind.  He could light up a room with his smile and laughter and with his “tell it like it is” attitude and distinctive “swagger”, Alex was loved by everyone who met him.  He enjoyed the company of his family and friends and like many, he loved to crack open a nice cold beer and socialize.  His big, booming voice could be heard from anywhere and often you would hear him saying, “Yes boy” or “Sure bud”.   Alex was athletic and enjoyed sports of all kinds.  He played Lacrosse for the local SunDevils for 6 years and achieved his black belt in Tae Kwon Do, doing so by training with his dad and brother.  He also liked to go golfing – especially with his grandpa, his buddy and cousin, Mitchell and of course, his brother.  Alex also enjoyed the outdoors and spent time fishing with Randy.  He beamed with pride when he bought a brand new truck –  a 2012 Dodge 3500 Cummins.  Not only did he love his truck but so did his dog, Rosco and they loved going for rides together.  Rides on the way home from work meant a phone call to Mom and Dad and they would always chat.  Alex wasn’t short of conversation and according to his yearbook, his dad served him a 3 day in-school suspension for cell phone violation.  Alex was larger than life and his impact on our lives will never be forgotten.  He will live on in the many wonderful memories we all have of him.  Alex will be deeply missed by his parents, Roy and Annette Graf;  15 year old brother, Daniel (they were best buds and worst siblings!  Always there for each other – you mess with one, you deal with the other);  grandparents, Carol and Alan Ogilvie and Ken and Eva Graf;  great-grandma, Jeanie Ogilvie;  Auntie Trisha (Mike) Rolls and their family, Jeremy and Logan;  Auntie Renee (Kevin) Hirsch and their family Mitchell and Easton;  Auntie Bonnie and Uncle Rod Graf and their family, Nathan, Rebecca and Rachel;  Auntie Karen (Lorne) Dewart and their family, Amanda and Cole;  Auntie Kim (Al) Wilbee and their family, Christina and Kameran;  Uncle Robert (Carman) and their family, Chandler and Carley.  He is also survived by special friends, Curtis Jenkins, Jimmy Martinez, Taylor “Taco” Phillips, Derrian Nau, Brandon Sloan, Xavier Gloin, Randy MacDonald, Andrea Morales and many, many more.  Alex was predeceased by his great-grandpa, Jacob Lanz (1992), great-grandma “The Old Grandma”, Eva Lanz in 2005 and great-grandpa “By The Water”, Harry Ogilvie in 2005.  A time of visitation will be held at Cook Southland Funeral Chapel, 901 – 13 Street S.W., Medicine Hat, on Friday, February 14, 2014, starting one hour prior to the Vigil Prayers at 7:00 p.m.  The funeral service will be celebrated at Cook Southland Funeral Chapel on Saturday, February 15, 2014, at 11:00 a.m. with Reverend Father Fred Monk officiating.  Interment will follow at Hillside Cemetery.  (Condolences may be expressed by visiting www.cooksouthland.com)  If friends so desire, memorial tributes may be made directly to Mission Mexico, c/o St. Michael’s Parish, P.O. Box 56, Bow Island, Alberta, T0K 0G0.  Honoured to serve the family is Cook Southland Funeral Chapel, 901 – 13 Street S.W., Medicine Hat, Alberta  T1A 4V4   Phone 403-527-6455.

No Condolences for “ALEXANDER GRAF”