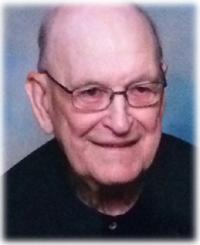 1928 ~ 2014
Willis Lyle Hummel was born in Chesterville, Ontario on January 29, 1928 and passed away in Medicine Hat, Alberta on Tuesday, February 25, 2014, at the age of 86 years.   Lyle’s life started in Mantario, Saskatchewan where he grew up with his family.  Dad married Wilma Lewis of Forgan, in 1950 and their marriage was blessed with four children.  Mom and Dad moved to Eatonia in 1955 and raised their family their.  Dad worked at various jobs over the years… farming, Pioneer Grain Elevator Agent, business owner and lastly, a Land Agent for Trans Canada Pipeline from which he retired in 1998.  He loved working for Trans Canada and could talk for hours about the people he worked with as well as the landowners.  Dad is survived by his children, a daughter, Diane (Joe) and their children, Brian (Kylee) McKenna and Layden, Amy (James), Jessica and Hanna; son, Grant; son, Dale (Shirley) and their children, Shelley, Brent and Wendy and their children;  daughter, Lois (Dennis) and their children, Amy (Jeff), Jayda and Melissa;  a brother, Howard of Kindersley;  sisters-in-law, Ethel Tuplin of Saskatoon and Florence Hummel of Longview as well as numerous nieces and nephews.  Dad was predeceased by his wife, Wilma in 1988;  parents, Willis and Clara;  brothers, Jack, Doug and Elwyn; in-laws, Florence Hummel, Martin Walyer, Eric Tuplin, Laverna Francis, Lorne Lewis, Marjorie and Lin Carr and Laura Lewis.  Family silently gathered at Cook Southland to pay their respects and a memorial service will take place at a later date.  (Condolences may be expressed by visiting www.cooksouthland.com)  Memorial donations in Lyle’s name may be made directly to the Canadian Diabetes Association, 102, 73 – 7th Street S.E., Medicine Hat, Alberta, T1A 1J2.  Honoured to serve the family is COOK SOUTHLAND Funeral Chapel, 901 – 13 Street S.W., Medicine Hat, Alberta, T1A 4V4.  Telephone:  403-527-6455.

No Condolences for “LYLE HUMMEL”