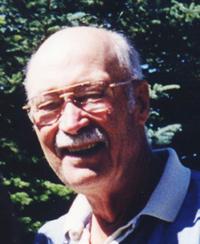 George Eric Richardson known to most as Eric Richardson was born at Valjean, Saskatchewan on October 12, 1921.
Eric lived on a farm with his parents until 1942, when he joined the Air Force. He took his initial training in Regina as an aircraft engine mechanic. Eric did his basic training in Toronto and final training in St. Thomas, Ontario. Eric was then stationed in Saskatoon, and later in Abbotsford, British Columbia.
In 1946 Eric married Rose George at Leslie, Saskatchewan. It was then they moved back to the family farm. Eric and Rose welcomed their first son Melvin in 1947. They continued to farm until 1950. Then Eric joined the Co-op Farm at Carrot River, where Arnold was born in 1951.
In 1953 Eric and Rose and their two sons Melvin and Arnold move to Wilcox. There Eric operated a repair shop. Later that same year Eric moved the family to Cabri where he worked for a John Deere and Chrysler dealer and eventually became a partner in the business.
In 1963 Eric and Rose had their third son Bradley at Cabri. In 1964 they moved to Abbey and purchased a John Deere dealership.
In 1967, Eric purchased the John Deere dealership in Leader and operated it until he sold in 1974. It was then that Eric started a tax preparation/investment business. He also purchased farm land near Leader and farmed until the early 1980s. Eric and Rose were divorced in 1987.
Eric sold his tax preparation business in 1989 and continued with an investment business which he started in 1975. Eric retired from Investors Group in 1997.
In 1988, Eric married Hilda Kelln. They resided in Leader until June 2013 when they moved to Cypress Lodge in Maple Creek.
Eric passed away peacefully with his wife by his side at Maple Creek on February 22, 2014 at the age of 92.
Eric is predeceased by his parents William and Amy Richardson; his sister Anne Siemens and brother-in-law Henry Siemens; granddaughter Kimberly Richardson.
Eric is survived by his loving wife Hilda, three sons – Melvin (Sheila Vance) Richardson of Edmonton, Alberta; Arnold Richardson of Dalmeny, Saskatchewan; Bradley (Laurie) Richardson of Dawson Creek, British Columbia.
Eric is also survived by Hilda’s two children; Kim (Christine) Kelln of Calgary, Alberta; Tammy Dietrich of Lethbridge, Alberta; grandchildren James (Stephanie) Richardson; Jodi (Ian) Kennedy; Devon (Bryna Casey) Richardson; Tyrell (Shelby Goodwin) Richardson; Benjamin (Leanna) Dietrich; Daniel (Courtney Ausmus- Dietrich) Dietrich; Jocelyn (Jay Whitbread) Kelln; Meagan (Alan Cho) Kelln; Graeme Kelln. Great grandchildren Parker Richardson, Audrey Richardson; Sara Dietrich; Vienna Dietrich; Eleanor Cho; Penelope Cho. Nieces Cheryl Eckhoff; Julie Siemens; nephew Craig Siemens. As well as numerous extended family.
The funeral service was held in Trinity Lutheran Church in Leader, Saskatchewan on Friday, February 28, 2014 at 2 p.m. with Pastor John-Mark Bredeson officiating. Interment will take place at a later date. Pallbearers were Graeme Kelln, Daniel Dietrich, Benjamin Dietrich, James Richardson, Devon Richardson, Tyrell Richardson. Honorary pallbearers were the Leader Lions. Honor Guard was the Royal Canadian Legion.
Donations in memory of Eric can be made to River Ridge Golf Course or Leader Lions Club.
To email an expression of sympathy you may visit www.gonebutnotforgotten.ca
Binkley’s Funeral Service, Maple Creek and Leader, in charge of arrangements. 306-662-2292

No Condolences for “RICHARDSON”