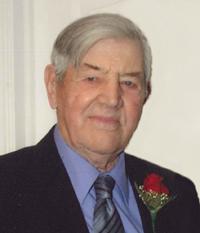 Edwin Heller, beloved husband of Mrs. Vi Heller of Medicine Hat, passed away on Friday, March 7th, 2014 at the age of 89 years. Edwin also leaves to cherish his memory five children, Barry (Pat) Heller, Valinda (Vern) Helm, Valerie (Delwin) Welk, Vidette Heller, and Brent (Jami-Loy) Heller; eight grandchildren, Kyle (Janet) Heller, Jocelyn Heller, Donaven (Amanda) Welk, Donita (Terry) Hartwick, Laurel Welk, Dawson Welk, Blake Heller, and Aiden Heller; seven great- grandchildren, Katelyn and Zachary Heller, Mavric, Cash and Parker Welk, Russell and Mitchell Hartwick; one brother, Theophil Heller; three sisters, Irene (Ted) Jess, Annette (Lawrence) Sackmann, and Bertha (Milbert) Riegel; one half-brother, Sam Wagner; Vi’s brother, William (Verna) Stuber; Vi’s sister, Delores (Gerald) Gartly; as well as numerous nieces and nephews. Edwin was predeceased by his parents, Conrad and Elizabeth Heller; one grandson, Bryce Heller; one sister, Hildagard (Harold) Stelter; half siblings, Erna (Robert) Schweeder, John Heller, Emil Heller (Lil and Bill Hutton), Emmanuel (Hilda) Heller, Mary (Otto) Stuber, Eli (Sophie) Wagner, William (Bertha) Wagner, and Ruth (Emil) Brost; two sisters-in-law, Lizzy Heller and Martha Wagner; and his parents-in-law, Frank and Molly Stuber. Edwin was born in Medicine Hat on January 20th, 1925. He grew up on the family farm in Wisdom which he took over in 1948. He married Violet Stuber on November 23rd, 1951 and they remained in Wisdom until after their children, Barry and Valinda, were born. In 1957, they moved to a farm just outside Medicine Hat where they continued farming at Wisdom and at home. During that time, Valerie, Vidette and Brent were added to the family. Ed loved his Lord, his family, farming and cattle. He enjoyed being with his children, playing with his grandchildren and watching them in their different activities. Church was a very important part of his life. He enjoyed singing in various quartets and later in the men’s chorus. He volunteered by ushering and greeting as well as serving at The Prairie Gleaners and helping wherever there was a need. Ed loved to read and read the Medicine Hat News every day. After a courageous battle with cancer, he peacefully slipped into the arms of Jesus. He was a wonderful and loving husband and father and will be deeply missed by all his family and friends. Those wishing to pay their respects may do so at SAAMIS MEMORIAL FUNERAL CHAPEL, #1 Dunmore Road SE, on Friday from 7:00 to 9:00 p.m. The Funeral Service will be held in HILLCREST EVANGELICAL MISSIONARY CHURCH, 3785 – 13th Avenue SE, on Saturday, March 15th, 2014 at 2:00 p.m. with Reverend Mark Bolender officiating. A Private Interment will take place in the Family Plot at Saamis Prairie View Cemetery. Memorial gifts in Edwin’s memory may be made to The Prairie Gleaners, 112 – 1st Street SW, Medicine Hat, Alberta, T1A 3Y9, or to Whispering Pines Camp, Box 23110, Medicine Hat Mall PO, Medicine Hat, Alberta, T1B 4C7. Condolences may be sent through www.saamis.com or to condolences@saamis.com subject heading Edwin Heller. Radio funeral announcement can be heard on Friday around 11:45 a.m. on 93.7 Praise FM. Funeral arrangements are entrusted to SAAMIS MEMORIAL FUNERAL CHAPEL CREMATORIUM & RECEPTION CENTRE, “The Chapel in the Park”, locally owned and directed. Should you wish any additional information, please telephone (403)528-2599