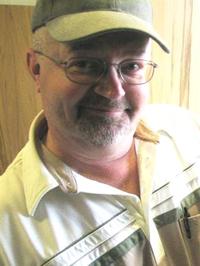 Darrell Brent Hadler, “Had”, passed away in the early hours of Tuesday, March 11th, 2014 at the young age of 56.  Darrell leaves behind his loving wife, Diane; his two children, Chad Hadler and Michelle (Chad) Hurlbert; his parents, Del and Marion Hadler; his sister, Lori (Doug) Streifel and his four grandchildren, Jaxon and Rio Hadler and Jada and Camryn Hurlbert.  Darrell was predeceased by his father- and mother-in-law, John and MaryAnn Thome.  Darrell was born in Medicine Hat on September 25th, 1957. As a kid, Darrell was often tearing up the coulees and later, in his teens, was often tearing up the streets in his muscle car. While working in the family business, Red Owl Foods, he matured into a fine young man and found his wife, Diane. They were married in 1977, and he enjoyed building their first home, a log house, with his own two hands. They had two beautiful children, Chad and Michelle. Throughout the years, Darrell volunteered many hours to his church, community, his kids’ activities, and helping countless people with countless odd jobs. No task was ever too difficult or complex for Darrell to tackle. After working at Wedding Star and driving school bus for Totem, he then decided to become his own boss and created “Had’s Handyman”. Years later, he and Diane started up their business of Five Star Home Inspections. When you couldn’t find Darrell inspecting homes, you would find him out at Elkwater Lake where he volunteered countless hours to the community. At their cabin, he enjoyed building his grandkids’ a recreational area which included a state-of-the-art tree house, complete with shingles and siding.  Darrell loved his family deeply and his world revolved around spending time with them.  He will be dearly missed by all his family and his many friends.
Those wishing to pay their respects may do so at SAAMIS MEMORIAL FUNERAL CHAPEL, #1 Dunmore Road SE, on Thursday from 7:00 to 9:00 p.m. The Funeral Service will be held in HILLCREST EVANGELICAL MISSIONARY CHURCH, 3785 – 13th Avenue SE, on Friday, March 14th, 2014 at 1:00 p.m. with Pastor Steve Pahl officiating. A Private Interment will take place in the Family Plot at Hillside Cemetery. Condolences may be sent through www.saamis.com or to condolences@saamis.com subject heading Darrell Hadler. Radio funeral announcement can be heard on Thursday around 11:45 a.m. on 93.7 Praise FM. Funeral arrangements are entrusted to SAAMIS MEMORIAL FUNERAL CHAPEL CREMATORIUM & RECEPTION CENTRE, “The Chapel in the Park”, locally owned and directed. Should you wish any additional information, please telephone (403)528-2599