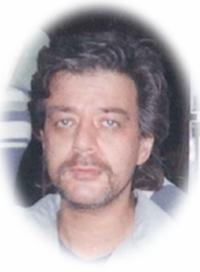 Jerry Wayne Chermishnuk of Medicine Hat, passed away on Saturday, March 29th, 2014 at the age of 56 years. Jerry was born in Maple Creek on March 19th, 1958 to Michael and Kathryn Chermishnuk. He is survived by his wife, Suzanne; daughters, Amanda and Theresa; his sisters, Elizabeth and Marjorie; his twin brother, Terry (Kathy); many nieces and nephews; and close friends, Blaine and Marci Nunweiler. Jerry was predeceased by his parents; his brother, Larry; his sisters, Frieda and Beverley; and his nephew, Douglas. Jerry started every day with a walk to the store for The Calgary Sun. He always described himself as a voracious reader which made him very interesting to talk to. Jerry was very personable and would strike up a conversation with everyone he met. He was the happiest when his head was under the hood of a vehicle, his hands were greasy, and the radio was blaring. He worked in the gas and oil industry as a mechanic and millwright until he was injured. Jerry will be missed by all those who knew and loved him. At Jerry’s request, cremation has taken place and no formal funeral service will be held. Condolences may be sent through www.saamis.com or to condolences@saamis.com subject heading Jerry Chermishnuk. Funeral arrangements are entrusted to SAAMIS MEMORIAL FUNERAL CHAPEL CREMATORIUM & RECEPTION CENTRE, “The Chapel in the Park”, locally owned and directed. Should you wish any additional information, please telephone (403)528-2599