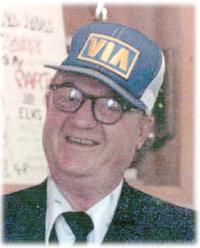 As our Lord tells us in the Gospel… \”Absent from the body, present with The Lord. Thank You Lord Jesus, that You promise never to desert us or forsake us and, that we who trust in You, will be with our loved ones again, when we come home at the appointed time.\” Amen!

John Robert (Bert) Close was born in Webb, SK., on September 3, 1918.  Bert’s dad, Robert, married Emily Jameson and they arrived in Canada from Ireland in 1908. Bert attended Prince of Wales school where his father was the sole teacher for 25 years.  Bert married Doris Millar in July of 1941 and had three children together, David, Van and Dolores.  Following Doris’ passing in 1992, he then married, Ramona Chinook and they enjoyed a wonderful relationship for 21 and a half years, until his passing on May 18, 2014, at age 95. Bert had a great sense of humour and had many friends from all walks of life. He was a caring and devoted husband, father, grandfather and great-grand father.  He worked for the CPR in various roles, retiring in 1979 as a Conductor after 38 years of service.  Bert was the President of the Medicine Hat Curling Club, President of the Elkwater Golf Club and was a competitor in both sports. He was instrumental in starting the Gas City Mixed Curling Club with Doris, who skipped the Alberta Women\’s Curling Championship team in 1952-53. Bert and his teammates, Lloyd Hubbs, Bill Keith and Norm Gill received the honour as the oldest participants in the Centennial Bonspiel (1903-2003) and were proud to throw the first rock opening the event. In the early days, Bert was catcher for the CPR Cinders and helped to influence the building of the ball diamond on Division Avenue, where Canada Safeway Store now stands. While playing ball there, he caught for Eddy Faner, \”The King & His Court\” and helped promote various ball games.  Bert spent 23 of his 35 year retirement wintering in Arizona, where, he made many great friends that were maintained throughout his lifetime.  Bert was pre-deceased by first wife, Doris (1992); son, Van (1987);  brothers, Tony (Emily), Vic (Alyce) and is survived by his wife, Ramona Close, David (Leila) Close, Dolores (Dave) Williamson;  daughter-in-law, Hazel (Co) Spreeuw; 10 grandchildren, 10 great-grandchildren and step-sons, Darryl, Dean, Randy Chinook and their families.  Bert was carried in the arms of Jesus, passing from life to life in eternity at 1:42 a.m., Sunday, May 18, 2014.   Bert\’s life will be celebrated at Cook Southland Funeral Chapel, 901 – 13 Street S.W., on Wednesday, May 21, 2014 at 1:00 p.m. with Rev. Barrett Scheske officiating.  The family would like to thank the care staff at Good Samaritan and the \”greatest nurses on the 5th floor\” at Medicine Hat Regional Hospital.  If friends so desire, memorial donations in Bert’s name may be made directly to a charity of ones choice. (Condolences may be expressed by visiting www.cooksouthland.com)  Honoured to serve the family is Cook Southland Funeral Chapel, 901 – 13 Street S.W., Medicine Hat, Alberta  T1A 4V4  Phone 403-527-6455.