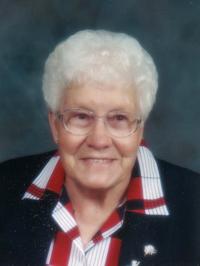 1920 – 2014
It is with heavy hearts, we announce the peaceful passing of Martha Mattson in Taber on Thursday, May 29, 2014 at the age of 93 years.
The Funeral Service will be held at Knox United Church, 4929 – 50 Avenue, Taber on Thursday, June 5, 2014 at 2:00 P.M. with Reverend Arij Langstraat officiating. A private burial service will be held at the Saamis Prairie View Cemetery, Medicine Hat.   Condolences may be forwarded by visiting our website at  www.southlandfuneral.com.
Martha is survived by her four children Arnold (Vickie) Mattson of Cochrane, Elaine (Richard) Barton of Edmonton, Gordon (Milma) Mattson of Lethbridge and Rodney (Loretta) Mattson of Hays;  grandchildren Brad, Shelley, Karri, Sherri, Destinee, Tandis, Krystle, Clinton, Allison and Matt;  seven great grandchildren and five great great grandchildren as well as numerous nieces and nephews and foster child Twylla Wachter.
Martha was predeceased by her husband of sixty eight years, Erling; parents George and Mary Miller; brothers Albert and Dave Miller; sisters Bertha Stuber, Beatrice Weeks and Leah Longmuir; sisters-in-law Elsie and Rose Miller; brothers-in-law Henry Stuber, Howard Weeks and Bob Longmuir as well as foster child Marie Wachter.
Martha was born in Pakowki, Alberta to George and Mary Miller and was raised on their farm. She met Erling Mattson, the love of her life and they were married soon after he joined the army, in July 1942 in London, Ontario. Their honeymoon was short but sweet at Niagara Falls. They then returned to Calgary where they resided until Erling was honorably discharged. Coming back to Orion, Alberta to continue farming was Erling’s desire and next venture so Martha became “a farmers wife”. It was here that their four children were born, Arnold, Elaine, Gordon and Rodney.
In the spring of 1954, Erling and Martha decided to move to Hays. This was a P.F.R.A. community to start a new type of farming, irrigation. As the years went by there were many great memories. Retirement was next so they moved to Taber in 1981. Camping with the Alberta Roamers took them too many places throughout Alberta and even a few out of province excursions. Mom loved to fish and getting the most fish each time was her greatest achievement. In her spare time she would either be making a patch work quilt, crocheting doilies, knitting sweaters or afghans, hardanger runners or even making slippers, socks or scarves. Baking the best bread and buns or raising the biggest and best garden were a few of her many gifted qualities. Martha was a lady of a thousand smiles. She had a smile for every one. Martha never missed an opportunity to visit with friends and family. She will be sadly missed but fondly remembered by all.
If friends so desire, memorial tributes in Martha’s name may be made directly to a charity of one’s choice.
Arrangements in care of Southland Funeral Chapel, Taber. Telephone: 1-888-223-0116.