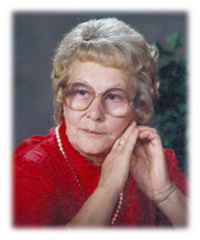 Mrs. Clara Martin, beloved wife of the late Mr. Harry Martin, formerly of Val Marie, Orkney and Maple Creek areas, passed away peacefully at the Medicine Hat Regional Hospital on Wednesday, May 28, 2014, at the age of 93 years.  She will be ever loved and remembered by her four children:  Wayne (Patsy) Martin of Calgary, Harvey (Cathy) Martin of Medicine Hat, Gaylene (Don) Constant of The Pas, Manitoba and Don (Julie) Martin of Medicine Hat;  seven grandchildren:  Deelaine (Scott) Simmonds;  Darwyn Martin;  LeeAnne (Trevor) Pastachak; Catherine Anderson; Tanya (Scott) Pidskalny, Blake Constant;  Chris (Jezi) Martin;  13 great-grandchildren; a sister, Esther Sunde of Regina as well as numerous nieces and nephews.  Clara was predeceased by her husband, Harry Martin, June 15, 1992 and by her parents, John and Rosina Pfeiffer of Maple Creek, Saskatchewan;  three sisters, Florence Anderson of Regina, Violet Kavanagh of Medicine Hat and Irene in infancy;  two brothers-in-law, Albin Sunde and Earl Anderson both of Regina and one grandson, Kevin Martin at age of 11 months.  Clara was born June 9, 1920, a daughter of John and Rosina Pfeiffer at Sagathun, Saskatchewan, a village in the rural municipality of Piapot.  Her parents moved to a farm seven miles southeast of Maple Creek where Clara was raised and attended Hay Creek School.  After finishing school, she helped her parents on the farm with milking and performing various chores, driving the extra team and hauling thistles from the neighbor’s for winter feed as well as hauling poles for the winter’s wood supply from Cypress Hills.  Clara loved horses and could harness and hitch them as good as “Dad” and would sooner clean out the barn than wash dishes; so much so, that she stayed in the outhouse until she was sure mom and sister had finished the dishes.  She also worked for several families in the district helping with household chores.  She loved to play cards with “Dad” and her sisters but never caught on to why Dad won most of the time.  Clara loved square dancing, round dancing, singing and playing music and could play the accordion, violin, organ and guitar.  She played at many dances with “Mom” and her sisters – she loved singing.  On June 28, 1941, Clara married her childhood sweetheart, Harry Martin, who also attended Hay Creek School.  They, along with sisters, Florence and Esther, spent many hours riding in the Cypress Hills.  The family moved to Val Marie PFRA community pasture March 1944 and later transferring in April 1946 to the Masefield Community Pasture where they managed and lived for 43 years raising four children.  Clara relished the outdoors keeping herself busy selling cream and butter (one customer taking 50 pounds each time) and her home grown turkeys with sales as far as Regina.  Clara was a news correspondent for the Shaunavon Standard, the Swift Current Sun and the Gravelbourg Tribune for many years.  In 1990, Clara retired with her husband to Medicine Hat but Harry’s retirement was short lived as he passed away with lung cancer leaving Clara living in her own home amongst her family until her passing.  She recently enjoyed playing crib at the Moose Hall.  Clara took pleasure in sharing her joy of singing with her family, especially at Christmas time.  Clara was a good mother always being there for her family.  She will be sadly missed by her family and her many friends.   A Celebration of Clara’s life will be held at Cook Southland Funeral Chapel, 901 – 13 Street S.W., Medicine Hat on Saturday, June 7, 2014, at 2:00 p.m. with Chaplain Doreen Cazes officiating.  A reception will follow in the Cook Southland Reception Facility.  Cremation has taken place and she will be reunited alongside her husband, Harry.  The family wishes to send a special “thank you” to the doctors and nurses of the Medicine Hat Regional Hospital and to the Caregivers who cared for “Mom” during her stay.  (Condolences may be expressed by visiting www.cooksouthland.com)  Honoured to serve the family is Cook Southland Funeral Chapel, 901 – 13th Street S.W. Medicine Hat, Alberta T1A 4V4 Phone 403-527-6455

One Condolence for “CLARA MARTIN”