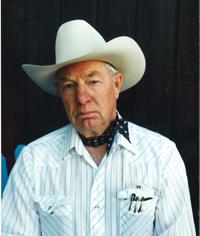 Garnet Leech passed away peacefully at his home with his family by his side at the age of 82. Garnet was born to Bella and William \”Harry\” Leech in Empress, Alberta. From an early age, he was passionate about animals (big and small), especially horses, which continued until his passing. Garnet did many things throughout his life…rancher, farmer, quarter horse trainer, business man, and real estate broker for over 40 years. He sold many farms and ranches in Alberta and Saskatchewan. He owned and operated Leech Agencies for many years. Garnet made his mark in the Alberta Quarter Horse Racing industry by raising and running many top quarter horses for the past 40 years in Alberta and the United States. He had a knack for picking some top runners at the horse sales in Oklahoma. Garnet\’s dreams of winning never left him. He met Florence in 1956, they married and their life-long adventure of ranching, horse racing, and raising four children took them from Calgary to Medicine Hat to the ranch at Wardlow and back to the acreage at Medicine Hat where Garnet passed. Garnet made beautiful hand-sewn chaps and harnesses and refurbished old saddles. He also enjoyed gardening and he and Mom spent many hours at the lake fishing and camping. Four years ago he built his own rustic cabin (a replica of his Empress cabin). Garnet is survived by his loving wife, Florence; his children, Nancy (Myles) Gray, William (Jane) Leech, Marcia Montean, and Jackie (Richard) Lysak; grandchildren, Dan (Lucy) Gray, Rachel (Scott) MacPherson, Cory (Melissa) Montean, Karri Montean, Bryce, Mariah, and Erica Huston, Haley Leech and Liam Leech; six great-grandchildren; and two sisters, Grace Cornfield and Betty (Bruce) Envic. Garnet was predeceased by his parents, Bella and Harry Leech; son-in-law, Ron Montean; parents-in-law, Jacob and Matilda Pfeifer; and brother-in-law, Don Cornfield. Garnet will be greatly missed. He was a great storyteller and there was never a dull moment when he was around. Those wishing to pay their respects may do so at SAAMIS MEMORIAL FUNERAL CHAPEL, #1 Dunmore Road SE, on Sunday, June 22nd, 2014 from 7:00 to 9:00 p.m. and on Monday, June 23rd, 2014 from 11:00 a.m. to 12:30 p.m. The Funeral Service will be held at SAAMIS MEMORIAL on Monday, June 23rd, 2014 at 2:00 p.m. In lieu of flowers, memorial gifts in Garnet\’s memory may be made to the Humane Society of Canada, Box 407, 1500 – 14th Avenue SW, Calgary, Alberta, T3C 1C9. Condolences may be sent through www.saamis.com or to condolences@saamis.com subject heading Garnet Leech. Funeral arrangements are entrusted to SAAMIS MEMORIAL FUNERAL CHAPEL CREMATORIUM & RECEPTION CENTRE, \”The Chapel in the Park\”, locally owned and directed. Should you wish any additional information, please telephone (403)528-2599

One Condolence for “GARNET ELDON LEECH”