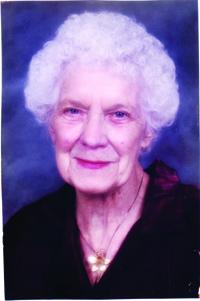 BROMLEY – Doris Emily Bromley (Tilbury) was born Dec. 26, 1918 to Emily and Walter Tilbury in the village of  Wonersh, Surrey, England. She passed away June 1, 2014 at Cypress Lodge.
She was the middle of seven children. She was 12 when the family moved to Cranleigh, a larger town. She finished school at 14 and worked as a maid for several families until she joined the Womens Land Army with her sister Mary, in 1939. They worked at a large market garden, which is still in business today.
In 1943 she met Bill Bromley, a Canadian soldier. They were married in 1944 (April 8). Their first daughter Amelia (Min) was born in Cranleigh in June 1945.
Bill returned to Canada after the war and Doris and Min followed on July 26, 1946. They landed at Halifax, Pier 21 after a long ocean voyage. They travelled by train to Maple Creek and settled on the farm in the Aylesford school district. Kathleen  (Kathie) was born in 1947, Lily in 1950 and John in 1956. The family moved to Maple Creek in 1958.
Doris began to work in the kitchen at the old army hospital and in 1963 was excited to move to the then-new hospital. She worked there until she retired in 1984 after 26 years.
Doris was a faithful member of St. Mary’s Anglican Church and served on the Vestry, Alter Guild and was a member of the ACW. She also belonged to the Maple  Creek Homemakers Club and the Hospital Auxiliary.
Doris was honoured in 2008 by the government of England for her service in the Women’s Land Army. She received a pin with the Land Army crest and a certificate of appreciation signed by Gordon Brown, the then prime minister of England.
Doris was predeceased by her parents Walter and Emily Tilbury, three sisters Ruby, Lily and Mary; one brother Sid and her husband of 64 years Bill. She is survived by her sister Pamela and brother Philip.
Doris is also survived by her children Min, Kathie, Lily and John; seven grandchildren, 21 great grandchildren and four great, great grandchildren. She will be greatly missed by family and friends alike.
The funeral service was held in St. Mary’s Anglican Church in Maple Creek, Sask. on Mon., June 9 at 2 p.m. with Rev. Peter Boote officiating. Interment took place at the Maple Creek Cemetery. Honorary pallbears were all those who shared in Doris’s life.
Friends who wish to may remember Doris with a gift to the Southwest Healthcare Trust c/o Cypress Credit Union.
To email an expression of sympathy, you may visit www.gonebutnotforgotten.ca
Binkley’s Funeral Service, Maple Creek and Leader, in charge of arrangements. 306-662-2292

One Condolence for “BROMLEY”