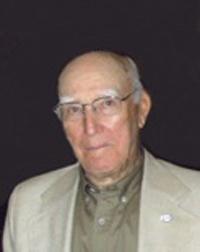 Phillip Bernard \”Barney\” Gogolinski of Orion, beloved husband of the late Gladys Gogolinski, passed away on Monday, July 14th, 2014 at the age of 94 years. Barney leaves to cherish his memory his three children: Marilynn (Lowell) Kulak of Edmonton and their daughters, Kristi of Edmonton, and Marlow (Jill) of Edmonton and son, Kade; Tess (Dale) Krawchuk of St. Albert; and Phil (Maxine) of Orion and their children, Kyle (Christine) of Fort MacMurray and daughter, Rachel, and Ryan (Julie) of Orion and daughter, Elise; sisters-in-law, Gwen Gogolinski and Edna Webber; as well as numerous nieces and nephews. Barney was predeceased by his wife, Gladys; his parents, Sabin and Della Gogolinski; his son, Roderick; and his brother, Paul. Barney was born on April 30th, 1920 in Medicine Hat, the second son of Sabin and Della Gogolinski. He was given the name Phillip Bernard, but was nicknamed Barney as a teenager. His childhood was spent on the family farm exceptfrom 1927 to 1931 when he lived with his aunt and uncle in Independence, Wisconsin. Barney completed his Grade 10 education and worked on the farm and ranch with his father for five years. In the winter of 1940, he attended youth training in Medicine Hat and then moved to Montreal where he worked in a ship building and aircraft factory. Barney married Gladys Tuttle in Montreal on July 7th, 1941. Their daughter, Marilynn, was born in Montreal and they then returned for the harvest in 1941 with their small family. Tess, Phil and Roderick were born in Orion. Barney joined the Army in 1942 and spent three and a half years in Africa, Italy and NW Europe. He was a tank driver, corporal and crew commander. Barney was discharged in 1946. Following the war, he moved back to Orion and lived and worked on his father\’s farm until October 1948 when he purchased the Wager farm. In 1984, Barney and Gladys moved their house from the farm into the town of Orion. Barney remained until May 2011 when he moved into Meadowlands Retirement Residence. Barney was a member of the Orion Community Club, the Alberta Wheat Pool, and the Orion Co-op. He was the Director of Community Auction Sales, Magistrate, School Trustee, Director of the Seed Cleaning Plant, and an Advisory Board Member for the Federal Research Station. Barney was interested in all sports playing softball, baseball and badminton. He remained active by refereeingbasketball for the school teams and umpiring slow pitch and baseball games. He enjoyed music and local entertainment as well as working with education and young people. He was proud to have witnessed the change from the horse and buggy days to the space age. The Funeral Service will be held at SAAMIS MEMORIAL FUNERAL CHAPEL, 1 Dunmore Road S.E., on Friday, July 18th, 2014 at 1:30 p.m. with Pastor Dave Shauf officiating. A PrivateInterment will follow at Saamis Prairie View Cemetery. A Come and Go Reception will be held at the Saamis Creekside Centre, Saamis Memorial Funeral Chapel, #1 Dunmore Road SE, following the funeral service. Condolences may be sent through www.saamis.com or to condolences@saamis.com subject heading Barney Gogolinski. Funeral arrangements are entrusted to SAAMIS MEMORIAL FUNERAL CHAPEL CREMATORIUM & RECEPTION CENTRE, \”The Chapel in the Park\”, locally owned and directed. Should you wish any additional information, please telephone (403)528-2599