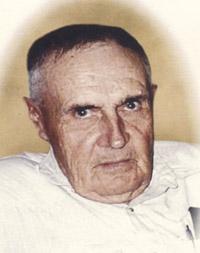 Marvin Daniel Fricke was born March 14, 1923 at home in the Arbana District. He passed away July 9, 2014 at home in Maple Creek, after a courageous battle with cancer, surrounded by his loving family.
He leaves behind to cherish his memory, his loving wife Maxine; three daughters – Charolette Somers and her husband Glenn, Myrna Widmer, Shawna Phaff and her husband Rod; six grandchildren – Trevor Somers, Ryan Somers and his wife Jacquie, Tricia Ressler and her husband Curtis, Kevin Koch and his wife Beth DeMaio, Quincy Phaff and Amelia Phaff. Also by three great granddaughters – Cypress and Ursa Koch-DeMaio and Olivia Ressler, and many nieces and nephews. Marvin was the second youngest of eight children.
He was predeceased by his mother Mary and father Charles, as well as brothers and sisters, Clarence, Frances, Alvin, Margaret (Evelyn), Martin, Gladys and Ernest.
Marvin married Maxine Anderson on October 29, 1946 in Maple Creek. They purchased a farm in 1950 and resided there until retiring to Maple Creek. They raised their three daughters on this farm. Marvin loved farming and ranching and being his own boss.
Marvin enjoyed playing cards, especially crib and rummy. Another pastime for many years was curling. Socializing at one of the many cafes allowed Marvin to catch up on the latest news. He also loved to watch sports on TV, especially the Toronto Blue Jays.
Marvin was a wonderful husband, father and grandfather and will continue to have a huge influence on his family\’s lives. He will be remembered as a loving man who was patient and kind. Marvin was sensitive, but yet over the years demonstrated unwavering strength in dealing with life\’s obstacles.
Marvin was  a man of strong, but quiet faith. His belief system inspired his family and helped them through this difficult time. Many times during Marvin\’s life, a Higher Power was looking after him. He was a faithful listener of the Lutheran Hour every Sunday morning.
The family is so grateful that Marvin did not have any pain with his illness. His wife Maxine, along with his daughters and the home care team were able to help Marvin stay in his home until the end.
A private family graveside service was held on Monday, July 14 at 1 p.m. in Maple Creek with Pastor Brad Julien officiating. Afterwards a memorial luncheon was held at the Elks Hall for family and friends, provided by the Royal Purple and Lutheran Ladies. The eulogy was read by grandson Kevin Koch. Music was provided by Marvin\’s nieces Isabelle, Shirley, Joanne and Joanne\’s husband, Ken and Marvin\’s grandson Quincy Phaff. Pallbearers were Marvin\’s grandchildren – Trevor Somers, Ryan Somers, Tricia Ressler, Kevin Koch, Quincy Phaff and Amelia Phaff.
Those who wish to, may remember Marvin with a gift to the Lutheran Laymen\’s League. You may visit the website lll.ca or mail to: Lutheran Laymen\’s League, 270 Lawrence Ave., Kitchener Ontario, N2M 1Y4.
To email an expression of sympathy you may visit www.gonebutnotforgotten.ca.
Binkley\’s Funeral Service, Maple Creek and Leader, in charge of arrangements. 306-662-2292