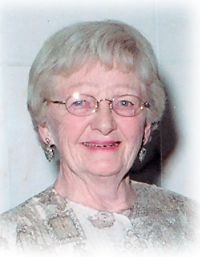 1949 ~ 2014
t is with heavy hearts that the family of Mary (Marie) Pound, beloved wife of Donald Pound, announces her passing while at the Medicine Hat Regional Hospital on Wednesday, July 23, 2014.  Marie was born in Gorey, Ireland, a daughter to John and Ellen Lawlor.  She served in the British Navy and was training as a nurse when she moved to Canada.  She met Don and were later married on November 20, 1954 in Hanna, AB.  Their marriage was blessed with two children, David and Sheila.  Marie was an astute nurse and worked for many years at the Medicine Hat Auxiliary Hospital.  She was meticulous in her work and trained many fine nurses throughout the years.  She was a lady of unwavering faith and was a devoted member of St. Patrick’s Catholic Church for many years.  Her strong christian values reflected as a mother and care provider.  Marie loved to travel and venture off on holidays.  She travelled extensively and enjoyed going back to her homeland of Ireland.  Her family and friends were important to her and she will be deeply missed by her children, David Pound and Sheila Kosolofski;  grandchildren, Jarod Kosolofski and Marcia Pound;  siblings in Ireland, Catherine Cardiff, Eileen Telford, Sheila Cardiff and Jim Lawlor;  sister-in-law, Phyllis Pound as well as numerous nieces and nephews.  She was predeceased by her parents;  a sister, Peg (Bill) Hayden;  brothers-in-law, Delmar Pound, Jack and Mick Cardiff and a son-in-law, Bill Kosolofski.  The Funeral Mass will be celebrated at St. Patrick’s Roman Catholic Church, 238 – 2nd Avenue N.E., Medicine Hat on Tuesday, July 29, 2014, at 11:00 a.m. with Reverend Father Alfonse Narisetty celebrant.  Interment will follow at Hillside Cemetery with a luncheon thereafter in the Reception Center at Cook Southland Funeral Chapel.  (Condolences may be expressed by visiting www.cooksouthland.com)  Memorial donations in Marie’s name may be made directly to the charity of ones choice.  Honoured to serve the family is COOK SOUTHLAND Funeral Chapel, 901 – 13 Street S.W., Medicine Hat, Alberta, T1A 4V4.  Telephone:  403-527-6455..