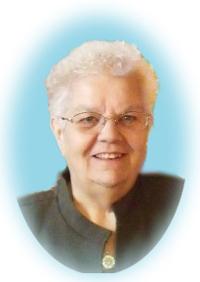 1934 ~ 2014
It is with sadness that the family of Marjorie Marie Riediger announce her peaceful passing which occurred at the Medicine Hat Regional Hospital on Sunday, July 27, 2014, with her husband, Chad by her side.  Along with David “Chad”, left to cherish Marj’s memory are her devoted children, Carman (Angie) Riediger of Medicine Hat, Cindy (Paul) Bellefeuille of Okotoks and Virginia Riediger of Lethbridge. She is also survived by her adoring grandchildren, Adam Bellefeuille, Miranda Bellefeuille and Michael Riediger;   great-grandson, Aidric Bellefeuille as well as her brother, Art (Connie) Merkel of Strathmore. She is predeceased by her parents, Ned and Bertilla Merkel;  brothers, Conn, Fred and Ed Merkel;  her mother-in-law and father-in-law;  one brother-in-law and one sister-in-law. Those wishing to pay thier respects may do so at Cook Southland Funeral Chapel, 901- 13 Street S.W., Medicine Hat on Thursday, July 31, 2014, between 7:00 p.m. and 8 p.m. and again starting one hour prior to the service. The celebration of Marj’s life will be held at Cook Southland Funeral Chapel on Friday, August 1, 2014, at 2:00 p.m. with Pastor Gerhard Reimer officiating. Interment will follow at Redcliff Cemetery. (Condolences may be expressed by visiting www.cooksouthland.com).  If friends so desire, donations in Marj’s honor may be made to the Diabetes Education Centre, 666- 5 Street S.W., Medicine Hat, Alberta, T1A 4H6 or to the Kidney Foundation of Canada, 6007 – 1A Street S.W., Calgary, Alberta, T2H 0G5.    Honoured to serve the family is Cook Southland Funeral Chapel, 901 – 13 Street S.W., Medicine Hat, Alberta  T1A 4V4  Phone 403-527-6455.

One Condolence for “MARJORIE RIEDIGER”