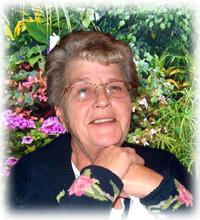 Dot (Dorothy) passed away at Medicine Hat Regional Hospital on Saturday, August 2, 2014, with her family by her side.  Dot was born on January 13, 1941, in Slayton, Minnesota to August and Ethel Cohrs.  She was the baby of the family with two older sisters, Dawn and Diane.  Dot lived her first four years in Cottonwood County on the farm.  The family then moved to Westbrook, Minnesota where she attended school grades one through twelve.  Dot met Bob for the first time on a trip to Canada with her parents after which she returned to Minneapolis to attend college.  On July 15, 1960, they were married in Sylvania Presbyterian Church.  They lived on the farm in Sylvania from 1960 to 1964, at which time they moved into Tisdale where Bob started L&C Electric.  Dot worked in a variety of jobs from waitressing at the Shell House, bookkeeper at Beehive and John Deere, was a sales rep for Beeland Co-op and Sears and finally a secretary and bookkeeper for Bob at L&C Electric and now C&C Electric.  Dot was very involved in the community, especially with Kinettes as a past president and was a lifetime member.  She was a volunteer as a board member for Tisdale Housing Authority for numerous years.  She loved to travel, read, sew, listen to music, but most of all she cherished her time with family.  She had a love for hockey, curling, bowling, football, ringette and dancing.  Dot was always there to lend a hand if needed.  Over the years she has touched the lives of over 20 foster children.   Dot is survived by her husband of 54 years, Bob (Robert);  children, Karen (Hal), Kelly (Vicki), Keon (Janey) and Yumi;  grandchildren, Andrea (Brad), Andrew (Denise), Aaron (Courtney), Robin (Brittany), Richelle, Mikai and Martyn;  great-grandchildren, Cole, Taylor, Kennedy, McKenna, Kinley, and Maddox and sisters, Dawn (Aryln), Diane (Bernard) and their families.  She also has numerous in-laws, nieces, nephews and cousins who all had a special place in her heart.  Dot was predeceased by her parents, August and Ethel Cohrs, and Bob’s parents;  Arthur and Lillian Clift.  She will be greatly missed by all who knew and loved her. “We love you Dottie, Mom, Grandma and Great-Grandma all the way to the moon and stars.”  A Celebration of Dot’s life was held at Cook Southland Funeral Chapel in Medicine Hat on Thursday, August 7, 2014.  (Condolences may be expressed by visiting www.cooksouthland.com)   Honoured to serve the family is COOK SOUTHLAND Funeral Chapel, 901 – 13 Street S.W., Medicine Hat, Alberta, T1A 4V4.  Telephone:  403-527-6455.

One Condolence for “DOT CLIFT”