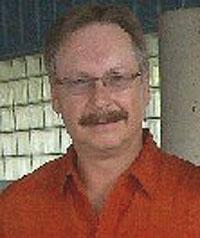 With deep sadness, our family wishes to announce the sudden passing of Craig Borland on Friday, August 29th, 2014 at the age of 52 years. Craig was a beloved husband, dad, brother, uncle and friend. Left to cherish his memory are his wife, Anita; children, Kimberly (Justin Congram) and Cameron; sisters, Carol Hauser (Russ), Patricia Smithdorf (Colin), and Terry Manery (Don); brothers, Scott Borland (Sharon) and Dale Miller (Maria); along with numerous nephews, nieces and in-laws. Craig was predeceased by his parents, William Borland and Shirley Miller; brother, Glen Borland; step-father, Gene Miller; step-brother, Alan Miller; and grandparents, Dora and Harvey Gowin. Craig was born in Calgary on January 25th, 1962 and spent his childhood years in Bow Island and Lethbridge. He met Anita while studying at Lethbridge College. They married on February 16th, 1991 and later moved to Medicine Hat where Craig was employed by Superstore for many years and then more recently at the Medicine Hat Exhibition Grounds. Craig was an avid golfer and loved to spend his free time in the summer on the links. He also had a passion for computers, either building his own or tinkering with their inner workings. Our lives on earth are measured in hours, days and years. A life well lived is not only measured by our accomplishments but also on what we have given to others. Craig, you have given us a lot by being who you are. You will be deeply missed and never forgotten. We would like to acknowledge and thank everyone for their thoughts and prayers. The Funeral Service will be held at SAAMIS MEMORIAL FUNERAL CHAPEL, #1 Dunmore Road SE, on Saturday, September 6th, 2014 at 1:30 p.m. with Gary W. Goran officiating. In lieu of flowers, memorial gifts in Craig\’s memory may be made to the Alberta Heart & Stroke Foundation, #124, 430 – 6th Avenue SE, Medicine Hat, Alberta, T1A 0S8. Condolences may be sent through www.saamis.com or to condolences@saamis.com subject heading Craig Borland. Funeral arrangements are entrusted to SAAMIS MEMORIAL FUNERAL CHAPEL CREMATORIUM & RECEPTION CENTRE, \”The Chapel in the Park\”, locally owned and directed. Should you wish any additional information, please telephone (403)528-2599