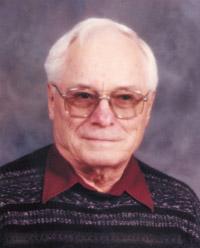 Aug. 8, 1926 – Sept. 4, 2014
George was born on August 8, 1926 at Punnichy, Sask. He married Celia Cartier on June 30, 1954 in Hudson Bay, Sask. They had two sons Merle and Craig in Hudson Bay, Sask.
George worked at various jobs until 1953 when his life started with the Department of Natural Resources in Hudson Bay. He moved to Pike Lake, Sask. in 1962 where he started his career in parks.  This career path consisted of moves to parks at Danielson, Battlefords, Black Strap, Duck Mountain, with the final destination of Cypress Hills in 1979.
He retired in Maple Creek in 1984 where he became an active member of the Knights of Columbus, St. Lawrence Parish. He was a devout religious man that would visit the sick and the old to comfort them in their time of need.
He is survived by his wife Celia, son Merle (Brenda) Foraie, grandchildren Jeremy, Arron, Mason, Dylan; son Craig (Naomi) Foraie, grandchildren Cody, Carlin, great granddaughter Payton; brother Mike Foraie, sister Mary Skawski, sister Elizabeth (Alphonse) Brisebois, brother Alex Foraie, sister-in-law Bernice Foraie, numerous nieces and nephews.
He was predeceased by his parents Frank and Barbara Foraie, brother Frank Foraie, brother-in-law Adolphe Skawski, sister-in-law Vonda, nephews Joey and Sano Foraie.
In lieu of flowers, donations may be made to the Alzheimers Society of Saskatchewan or a charity of your choice.
The funeral mass will be celebrated by Father Clement Nwankwo on Wed., Sept. 10, 2014 at 10:30 a.m. with Pam McConwell as organist.
To email an expression of sympathy you may visit www.gonebutnotforgotten.ca.
Binkley\’s Funeral Service, Maple Creek and Leader, in charge of arrangements. 306-662-2292