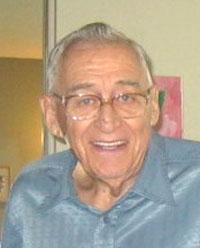 It is with deep sadness that we announce the death of Gilbert Allison Russell, who passed away peacefully at home in Medicine Hat on Tuesday, September 16th, 2014. Gil was born in Viscount, SK on July 23rd, 1928. He went to school in Leroy, SK where he enjoyed playing hockey and baseball and was a proud member of the Air Cadets making many lifelong friends. His love of sports continued through his life and he especially enjoyed watching the Blue Jays and the Saskatchewan Roughriders. As owner of Lorman Construction and Russell Supplies in Estevan, Gil oversaw the construction of many homes and commercial buildings in the southeast corner of the province. Gil greatly contributed to his community and was a lifelong member of the Estevan Kinsmen. Gil is survived by Betty, his loving wife of 62 years; six daughters, Barbara (Les) Saxon, Donna (Jay) Box, Linda (Mike) Fortowsky, Gloria (Bryan) Brewer, Pam Gress, and Wanda (David) Reece; grandchildren, Jim, Janice, Shawn, Jennifer, Kristen, Ben, Jessica, Tanya, Sonya, Sheri, Katelyn, Melissa, Ashley, Garrett and Matthew; and his 13 great- grandchildren. Gil is also survived by sisters, Joyce and Louise; brothers, Art (Georgina) and George (Helene); and sisters-in-law, Irene and Laura. Gil was predeceased by his son, Glen in infancy; and siblings, Elizabeth, Muriel, Bertha, Andy, and Dave. His memory will live on forever with friends and family far and wide that were recipients of their visits, and of Gil and Betty’s labour of love in the many inlaid wood boxes, tables and intarsia that they crafted. As per Gil\’s wishes, a gathering of immediate family was held in Medicine Hat. In lieu of flowers, donations may be made to the Children’s Hospital Foundation of Saskatchewan, #1 – 345 Third Avenue South, Saskatoon, SK, S7K 1M6 (website: www.childrenshospitalsask.ca). Condolences may be sent through www.saamis.com or to condolences@saamis.com subject heading Gilbert Russell. Funeral arrangements are entrusted to SAAMIS MEMORIAL FUNERAL CHAPEL CREMATORIUM & RECEPTION CENTRE, \”The Chapel in the Park\”, locally owned and directed. Should you wish any additional information, please telephone (403)528-2599