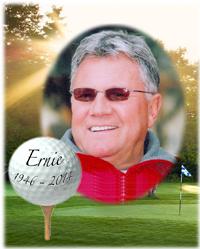 With his loved ones by his side, Ernest “Ernie” Gallant, beloved husband of the late Debra Cantalini-Gallant, passed away after a brief battle with cancer at the Medicine Hat Regional Hospital on Monday, October 13, 2014, at the age of 67 years.  Ernie was born in Griswold, Manitoba on December 11, 1946, a son to proud parents, Phil and Olive Gallant.  He grew up in the small communities of Corning and Welwyn, Saskatchewan and completed his schooling in Emerson, Manitoba.  He lived in various communities throughout Saskatchewan and Manitoba before moving to Medicine Hat in the 1970’s.  While in Medicine Hat, he met Debra Cantalini and they later married in August of 1991.  Ernie was a charismatic fellow who always wore a wonderful smile and had a great sense of humour.  His enthusiasm was contagious  and it was easy to see why he was well liked and people were naturally drawn to him.  All of these qualities made Ernie the man he was.  Always a car buff, Ernie could be seen cruising around in his prized Camaro.  With his keen interest in cars, it was suiting that he would spent most of his career in the auto industry.  For nearly the past 25 years, Ernie was a dedicated and loyal employee of Murray Chev-Olds in Medicine Hat.  During this time, many friendships were made.  The bond he had with his co-workers was one of family and he was so very grateful for the support and care that saw him through some difficult times.  Ernie was a true friend who really cared about the lives of those he knew, and they returned the same feelings.  In his youth he was a tenacious hockey player and loved water skiing… in his more recent years, Ernie became addicted to the game of golf!  He really enjoyed spending time on the course, golfing with his buds.  He will be deeply missed by his friends and his memory will be cherished by his sister, Marian (Lynn) Switzer of Portage la Prairie;  nieces, Tracy (Gordon) Walker and family, Rhonda (Daniel) Switzer-Nadasdi and family and Marni (Craig) Zamzow and family;  special friends, Glenda Leitch, Clarence and Terry Bechtold and family and Brian and Lee Scobie and family.  Ernie was predeceased by his wife Debra Cantalini-Gallant in March of 2013 and his parents, Phil (1986) and Olive (1973) Gallant.  A Celebration of Ernie’s life will be held at the Medicine Hat Golf & Country Club, 10 Parkview Drive N.E., Medicine Hat on Saturday, October 18, 2014, at 1:30 p.m. with Reverend Chelsea Masterman officiating.  (Condolences may be expressed by visiting www.cooksouthland.com)  Memorial donations in Ernie’s name may be made directly to the Margery E. Yuill Cancer Centre, 666 – 5 Street S.W., Medicine Hat, Alberta, T1A 4H6.  Honoured to serve the family is Cook Southland Funeral Chapel, 901 – 13th Street S.W. Medicine Hat, Alberta T1A 4V4 Phone 403-527-6455