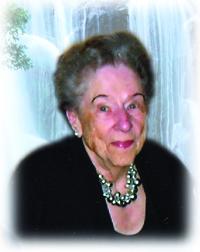 It is with great sadness that we announce the passing of Maureen Joyce DesHarnais, beloved wife of Eugene DesHarnais, at the Medicine Hat Regional Hospital on Monday, October 13, 2014 at the age of 83 years, with family members by her side.  Maureen leaves to cherish her memory her daughters, Debbie Hintz, Cindy Good and Patty Henchel, numerous grandchildren, great-grandchildren and many close friends.  She was predeceased by her son, George Henchel, grandson, Trevor Hintz, son-in-law, Tom Good, her parents, Bill and Adeline Gill,  brother, Jerry Gill, brother-in-law, Galvin DesHarnais and sister-in-law, Betty Miron.  Maureen was born and raised in Medicine Hat where she attended many local schools including Alexandra High School.  In 1950, Maureen was named Medicine Hat’s Teen Queen and this started a life of modelling for local dress shops which eventually led to her singing and dancing in musical theatre.  From her first marriage in December 1951, Maureen had four children: Debbie, Cindy, Patty and George.  In January of 1964 she lost her son. This was a very difficult time in her life but her strength and faith got her through.  Maureen worked at the Medical Arts Clinic in Medicine Hat and Lethbridge in the early years of her life.  She belonged to many service organizations throughout her lifetime which included Jaycettes, Royal Purple and later the Women’s Auxiliary at the Royal Canadian Legion.  On March 15, 1972, Maureen married Eugene DesHarnais.  During their years together, they travelled throughout Canada and to various locations in the USA.  They were inseparable and you’d rarely see one without the other.  Maureen’s interests throughout her life included modelling, dancing, golfing and her family. She was a classy lady and enjoyed dressing up each day and layering herself in her favorite jewellery… she loved to look striking!  Later in life Maureen enjoyed walking at the mall or the Co-op, watching her grandchildren and their interests, visiting the local pubs where she enjoyed playing the VLT’s and attending the weekly meat draws at the Legion (which of course she never won Ha! Ha!).  She will be sadly missed by all who knew her.  The Celebration of Maureen’s life will be held at Cook Southland Funeral Chapel, 901 – 13 Street S.W., on Friday, October 17, 2014 at 11:00 am with Reverend Barrett Scheske officiating.  Condolences may be expressed by visiting  www.cooksouthland.com).  Memorial donations in Maureen’s name may be made directly to the Margery E. Yuill Cancer Centre, Medicine Hat Regional Hospital, 666 – 5th Street SW, Medicine Hat, Alberta  T1A 4H6.  Honoured to serve the family is Cook Southland Funeral Chapel, 901 – 13 Street S.W., Medicine Hat, Alberta  T1A 4V4  Phone 403-527-6455.