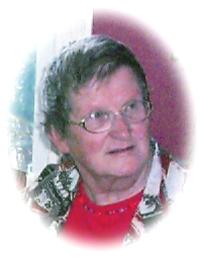 1939 ~ 2014
Nellie Mae Spicer passed away peacefully at St. Joseph’s Home -Carmel Hospice in Medicine Hat on Tuesday, November 11, 2014, at the age of 75 years.  Nellie  was the oldest child of Lester and Ellen Somerville.  She was born and educated in Rolling Hills, Alberta where she received her primary schooling.  Nellie furthered her education by achieving a teaching degree and later in life she became a Diaconal Minister with the United Church of Canada. Nellie was an advocate for the youth and fought for social justice issues in numerous organizations. She loved life and never backed down from any challenge she was faced with. Nellie leaves to cherish her memory her loving husband of 52 years, George, as well as their children, Lester Spicer, Tom (Dawn) Spicer and Gina (Lance) Meroniak; four grandchildren, Randall and Samantha Spicer and Kelly and Rikki Meroniak. She is also survived by her siblings, Glen (Linora) Somerville, June (Marvin) Lyons, Vera Elson, Earl Somerville, Allen (Carol) Somerville, Ina (Leif) Nielsen, Dean Somerville, Amy Armstrong and Dan (Jessie) Somerville;  brothers and sisters-in-law, Stanley (Marj) Spicer, Darcy (Marie) Spicer, Laurie (Cheryl) Spicer, Patsy (Rene) Trefau, Jenny Anderson and Haroldene (Wayne) Ashby as well as numerous nieces, nephews, great-nieces and great-nephews.  Nellie was predeceased by her parents, Lester and Ellen as well as one brother Raymond.  A Memorial Service in Nellie’s honour will be held later in the spring and will be announced closer to that time.    (Condolences may be expressed by visiting www.cooksouthland.com)  Honoured to serve the family is Cook Southland Funeral Chapel, 901 – 13th Street S.W. Medicine Hat, Alberta T1A 4V4 Phone 403-527-6455