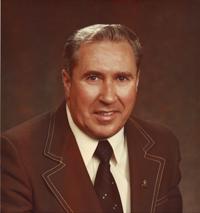 Walter Orest Franko, beloved husband of Doris Franko of Medicine Hat, passed away on Sunday, November 16th, 2014 at the age of 81 years. Walt leaves to cherish his memory his children, Dale (Cindi) Franko and Diane (Murray) Morton, both of Medicine Hat; two grandchildren, Brett Morton and Jenna Morton; his “adopted” grandsons, Connor, Cameron and Kyle Gray; two brothers, John Franko and Donald (Connie) Franko, both of Saskatoon; two sisters, Violet (Peter) Kapeluck and Carol (John) Smith, both of Saskatoon; one brother-in-law, Jim (Delores) Mutschler of Regina; two sisters-in-law, Lorraine Jackle and June (Allen) Donst, both of Medicine Hat; as well as numerous nieces and nephews. Walt was predeceased by his parents, Metro and Kay Franko; and one sister, Olga (Leo) Bast. Walt was born on November 25th, 1932 in Watson, Saskatchewan and married Doris Mutschler on October 27th, 1956 in Medicine Hat. Walt was a realtor for over 30 years and served as Director of the Alberta Real Estate Board for 4 years. He was also Past President and Life Member of the Medicine Hat Real Estate Board. Walt was well known in the community and was a member of the Lion’s Club for many years. Walt enjoy curling, golfing, dancing, camping, traveling and spending time with his family. Walter\’s family would like to thank Riverview Care Centre for their excellent care and support of Walt for the past 4 years. Those wishing to pay their respects may do so at SAAMIS MEMORIAL FUNERAL CHAPEL, #1 Dunmore Road SE, on Thursday from 7:00 to 9:00 p.m. and at VICTORY LUTHERAN CHURCH, 2793 Southview Drive SE, on Friday from 10:00 to 10:55 a.m. The Funeral Service will be held at VICTORY LUTHERAN CHURCH on Friday, November 21st, 2014 at 11:00 a.m. with Diaconal Minister Lila De Waal and Reverend Barrett Scheske co-officiating. Interment will take place at Hillside Cemetery following the reception. Memorial gifts in Walter\’s memory may be made to Canadian Lutheran World Relief, 600 – 177 Lombard Avenue, Winnipeg, Manitoba, R3B 0W5, or to the Alzheimer’s Society, 401D – 3rd Street SE, Medicine Hat, Alberta, T1A 0G8. Condolences may be sent through www.saamis.com or to condolences@saamis.com subject heading Walter Franko. Radio funeral announcement can be heard on Thursday around 11:35 a.m. on 93.7 Praise FM. Funeral arrangements are entrusted to SAAMIS MEMORIAL FUNERAL CHAPEL CREMATORIUM & RECEPTION CENTRE, \”The Chapel in the Park\”, locally owned and directed. Should you wish any additional information, please telephone (403)528-2599