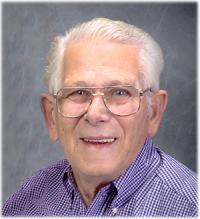 Hendrik (Hank) Slofstra, beloved husband of Lena Slofstra of Medicine Hat, passed away on Saturday, November 15, 2014, at the age of 76 years.  Hank was born on December 17, 1937 in Nietap, Groningen, Holland where his family owned and operated two grocery stores.  In 1952, and at the age of 14 years old, the family immigrated to Canada and settled in Redcliff, Alberta.  Hank started his career in the painting business with Dutch Brothers and then Emil’s painting.  He married the former Lena Hazelaar in 1964 and together they were blessed with two children, Teresa in 1966 and Pete in 1967.  In the 70’s, Hank and his partner, James Aasman started Western Painters and after a decade later he became the owner of Hank’s Painting.  Many throughout the community knew Hank as “Hank The Painter”.  He continued to work up until his retirement at the age of 67.  Even though in Canada for over 60 years, Hank loved the old country and especially enjoyed travelling to Europe with his family and to show them what made him so proud.  He was known as a kind and gentle man with a passion for fun.  He had many friends and Hank and Liny’s door was always open to anyone that wanted to drop by for a visit.  He loved music and had an incredible tenor voice.  Most importantly, his pride and joy was his family and especially his four grandsons that he affectionately called his “Grands”.  Besides his wife, Lena, he will be greatly missed by his family and friends.  Hank leaves to cherish his memory:  daughter, Teresa (Todd) Schile of Medicine Hat and Pete Slofstra (Laela) of Calgary;  his “Grands”, Jaren (Skylar Valkenburg) Schile, Drayden Schile, Rylan Schile and Justin Slofstra.  He is also survived by one brother, Martin (Janny) Slofstra;  sister, Peterdiena Scheepstra of Holland;  in-laws, Bill Aasman, Harm (Hennie) Hazelaar of Brampton, Ontario, Mary (Niek) van Brenk of Holland as well as many nieces and nephews.  Hank was predeceased by his parents, Hendrik and Trientje Slofstra (nee Bralts);  step-mother, Nel Slofstra (nee Stigter);  brothers, Lammert Slofstra, Bill Slofstra and Pieter Slofstra;  sisters, Jackie Aasman and Tina Aasman as well as numerous in-laws, nieces and nephews.  Those wishing to pay their respects may do so at Cook Southland Funeral Chapel, 901 – 13 Street S.W., Medicine Hat on Thursday, November 20, 2014, between 11:00 a.m. and 12 Noon with interment following at Hillside Cemetery.  The Funeral Service will be held at the Christian Reformed Church, 300 Primrose Drive S.E., Medicine Hat on Thursday, November 20, 2014, at 1:00 p.m. with Pastor George Koopmans officiating.  (Condolences may be expressed by visiting www.cooksouthland.com)  In support of COPD, memorial donations in Hank’s name may be made directly to the Alberta Lung Association, P.O. Box 4700, Stn South, Edmonton, Alberta, T6E 9Z9.  Honoured to serve the family is Cook Southland Funeral Chapel, 901 – 13th Street S.W. Medicine Hat, Alberta T1A 4V4 Phone 403-527-6455