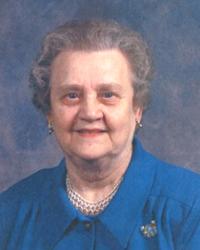 With sadness we announce that Philomena Hecker passed away on November 17th, 2014. Philomena was born on September 27th, 1927 in the Ukraine. She was predeceased by her husband, Michael; her parents, Philipp and Georgiene Garrecht; her brothers, Eduard and Frank; her sister, Eugenie Moser and brother-in-law, Frank Moser; and her sister, Rose. Philomena is survived by her children, Frank (Geri) Hecker, Eduard (Olga) Hecker, Georgina Hecker, Maria (Dean) Sehn, and Lydia (Ron) Buscholl; her grandchildren, Scot (Carla) Hecker, Andrea (Arno) Cumatz, Coralie Hecker (Robert Ozegovich), LaryssaHecker, Steven Hecker, Christopher Sehn, Jessica Sehn, Nathan Sehn, Michaela Sehn, Haley Buscholl, Rianna Buscholl and Josh Buscholl; her great-grandchildren, Juliana Cumatz, Javier Cumatz, Maya Cumatz, Lawson Ozegovich, and Owen Hecker; her brother, Phillip (Lena) Garrecht; her Aunt Rosa Klaus; and numerous other relatives in Germany and Winnipeg. Philomena immigrated to Germany in 1944 where she met Michael Hecker. They immigrated to Canada in 1956 thanks to the sponsorship of Joe Garrecht of Prelate, and eventually settled in Medicine Hat to raise their family. Mom and Dad cleaned offices to help pay off the mortgage and Mom also did some house cleaning. Philomena obtained her nurses aid certificateand worked in the nursing home helping to look after the elderly residents. She loved working in her garden as well as baking and preparing Sunday dinners for her children and their families always making sure that everyone had enough to eat. She was proud of her grandchildren and great- grandchildren. Philomena was devoted to her church and attended mass as often as she could throughout the week. She sang in the choir for many years as singing to her was like praying twice. Philomena was also a member of the CWL for over 50 years. She will be greatly missed and lovingly remembered by her family and friends. Those wishing to pay their respects may do so at SAAMIS MEMORIAL FUNERAL CHAPEL, #1 Dunmore Road SE, on Thursday from 7:00 to 9:00 p.m. and at HOLY FAMILY PARISH, 1451 Strachan Road SE, on Friday from 12:00 to 12:55 p.m. Vigil Rites (Prayers) will be said at SAAMIS MEMORIAL FUNERAL CHAPEL on Thursday, November 20th, 2014 at 7:00 p.m. The Funeral Mass will be celebrated at HOLY FAMILY PARISH on Friday, November 21st, 2014 at 1:00 p.m. with Father Philip Le, celebrant. Interment will follow in the Roman Catholic Section at Hillside Cemetery. Memorial gifts in Philomena’s memory may be made to HALO, 12 – 49 Viscount Avenue SW, Medicine Hat, Alberta, T1A 5G4, or to the Canadian Red Cross Society, 398 Aberdeen Street SE, Medicine Hat, Alberta, T1A 0R2. Condolences may be sent through www.saamis.com or to condolences@saamis.comsubject heading Philomena Hecker. Radio funeral announcement can be heard on Thursday around 11:35 a.m. on Praise 97.3 FM. Funeral arrangements are entrusted to SAAMIS MEMORIAL FUNERAL CHAPEL CREMATORIUM & RECEPTION CENTRE, \”The Chapel in the Park\”, locally owned and directed. Should you wish any additional information, please telephone (403)528-2599