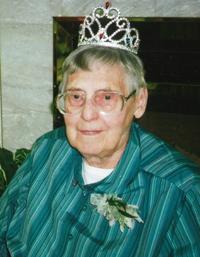 Edna Deutscher of Medicine Hat passed away on Saturday, November 29th, 2014 at the age of 96. Edna leaves to cherish her memory her two nephews, Fred and Robert Mallach; her five nieces Dorothy May, Peggy Mallach, Janet Wourms, Jeanne Madden and Karen Linsay; as well as their families. Edna was predeceased by her parents ; as well as her two nephews Ken Husch, and Douglas Deautscher; one brother Edwin (Irene) Deutscher as well as two sisters Erna (Clarence) Mallach and Linda (William) Husch. Edna was born in Burstall Saskatchewan and moved to Medicine Hat in 1937. In 1947 she then moved to Kelowna B.C. After three years in 1950 she came back to Medicine Hat and started her twenty five and half year career with Canada Safeway on the hill. In 1976 she retired from her career and followed her love and passion for traveling and volunteer work. There will be a private family interment at a later date. Memorial gifts in Edna’s memory may be made to Canadian Cancer Society 102 – 1865 Dunmore Road SE Medicine Hat, Alberta T1A 1Z8 or Canadian Diabetes Association
Medicine Hat & District Branch 102, 73 – 7th Street SE Medicine Hat, Alberta T1A 1J2 or to the Alberta Heart & Stroke Foundation 124, 430 – 6th Avenue SE Medicine Hat, Alberta T1A 2S8 Condolences may be sent through www.saamis.com or to condolences@saamis.com subject heading Edna Deutscher. Funeral arrangements are entrusted to SAAMIS MEMORIAL FUNERAL CHAPEL CREMATORIUM & RECEPTION CENTRE, \”The Chapel in the Park\”, locally owned and directed. Should you wish any additional information, please telephone (403)528-2599