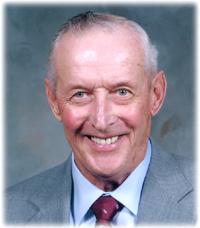 With heavy hearts the family of Mr. Ralph Hertz, beloved husband of Mrs.  Lillian Hertz, announce his passing at the Medicine Hat Regional Hospital on Tuesday, December 2, 2014, at the age of 83 years, one day short of his 84th birthday.  Ralph was born on a farm near Mendham, SK., on Dec 3, 1930 and moved with his family as an infant to the farm south of New Brigden, AB.  He attended several country schools and finished High School in Oyen.  Ralph married the love of his life, Lillian Zeliznik on August 18, 1956 in Medicine Hat.  His faith was important to him and he was an active member of Holy Family Parish in Medicine Hat.  Ralph loved the land and devoted his life to raising their five children on the same land he was raised on.  He was a caring and loving husband and father with a keen eye for detail.  Ralph could build and fix anything or come up with an invention and make it happen.  He was keenly interested in his grandchildren’s achievements and careers.  Ralph loved curling, was an avid golfer, enjoyed camping with his family and especially time spent with Lil and friends in Arizona.  His most memorable occasion was celebrating their 58th Wedding Anniversary in August 2014.  Ralph will be forever remembered in the hearts of his wife, Lil; children, Cheryl (Dale) Cummings and daughter Lindsy; Darcy Hertz and daughters, Karly, Mandy (Tirone) Parker; Rick (Mary) Hertz and sons, Danny, Tyson, Brandon; Terry Anne Hertz, son, Kurtis (Courtney) Heck, and daughter, Keely; Greg Hertz (Natalie Holman) and daughter, Eden.  He is also survived by his sisters, Lydia Biblow, Dorothy Smigelski and brother, Danny (Bonnie) Hertz as well as numerous nieces, nephews and extended family.  Ralph was predeceased by his parents and three sisters.  Those wishing to pay their respects may do so starting one hour prior to Vigil Prayers which will be recited at Cook Southland Funeral Chapel, 901 – 13 Street S.W., Medicine Hat on Sunday, December 7, 2014, at 7:00 p.m.  Visitation will also be offered at the Church starting one hour prior to the Funeral Mass which will be celebrated at Holy Family Parish, 1451 Strachan Road S.E., Medicine Hat on Monday, December 8, 2014, at 11:00 a.m. with Reverend Father Philip Le celebrant. Interment will follow at Hillside Cemetery.  If friends so desire, memorial tributes in Ralph’s name may be made directly to the Holy Family Parish Building Fund, 1451 Strachan Road S.E., Medicine Hat, Alberta, T1B 4V3 or to the Canadian Cancer Society, 102 Crestwood Square One, 1865 Dunmore Road S.E., Medicine Hat, Alberta, T1A 1Z8. Condolences may be expressed by visiting www.cooksouthland.com)  Honoured to serve the family is COOK SOUTHLAND Funeral Chapel, 901 – 13 Street S.W., Medicine Hat, Alberta  T1A 4V4  Phone 403-527-6455.

One Condolence for “RALPH HERTZ”