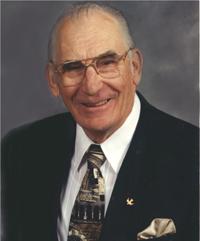 Mr. Herbert (Herb) Conrad Weiss passed away on December 7th, 2014 at the Foothills Hospital in Calgary, Alberta. Herb leaves to cherish his memory his loving wife, Matilda; two sons, Gerald (Dallas) and Keith (Kim); five grandchildren, Andrew (Leah), Justin (Cara), Danielle (Tyrell) Sears, Quintin and Parker; four great-grandchildren, Quade, Aven, Genevieve and Tristan; one sister-in-law, Laura; nieces and nephews and their families; and Matilda’s family. Herb was predeceased by two infant children; his parents, Conrad and Emma; one brother, Oscar; and two sisters, Elsie (Gordon) and Adela (Ted). Herb was born in Medicine Hat on October 21st, 1927. He was the youngest of four siblings. He received his education in Medicine Hat and worked at Alberta Clay Products as an apprentice machinist and also helped his father on the farm. Herb was the choir director with St. Peter Lutheran Church for over 40 years. There he met the love of his life, Matilda Kirchenman, and they were married in 1951 enjoying 63 wonderful years together. In the fall of 1951, Herb went to work at Suffield Experimental Station as a Machinist until 1956 when he took over the family farm. In 1957, Herb and Matilda built their home on the farm. The following year, they built a barn and raised chickens, pigs, milked cows and sold cream. Herb continued to work at the Glass Factory as a Machinist to make ends meet. They established Hat View Dairy in 1964, and it was during that year, working side by side in the new barn, that they started shipping fluid milk. Hat View Dairy Farm is still operating by Gerald and Keith and their families. Herb was a strong believer in community service. Throughout the years he volunteered on several different boards. He served on Church Council, was an active board member of the Medicine Hat Co-op, Medicine Hat Milk Producers, Alpha Milk, Alberta Milk Producers, Bellscott Natural Gas Co-op, Green Valley Water Co-op, Hat Swingers Square Dancing Club, and was still serving on the Veiner Centre Bridge Club until his passing. Herb loved wood working. He constructed several barns, built his homes, the cupboards in his kitchen, and some furniture. In 2006, Herb and Matilda received the Dairy Industry Achievement Award for their outstanding contribution to the Dairy Industry. One of Herb’s proudest moments came earlier this year when his family was recognized at the Calgary Stampede and awarded Farm Family of the Year 2014 for Cypress County. Herb enjoyed traveling with Matilda, family, and friends. Highlights included cruises and taking his grandchildren to Disneyland. Herb and Matilda square danced for many years. In their traveling days, they toured Europe and had the honor of Square Dancing for Lady Di and Prince Charles. Herb found great joy and was extremely proud when he could attend his grandchildren’s sporting events. He truly was their biggest fan and loved to tell others about their accomplishments. He enjoyed watching hockey, curling, baseball, and football. In his last few years, Herb was an avid bridge player which he enjoyed immensely. He was very dedicated to his church and was a devoted Husband, Father, Grandfather, Great Grandfather and Friend. He will be greatly missed by all those whose lives he touched. Those wishing to pay their respects may do so at ST. PETER LUTHERAN CHURCH, 758 – 8th Street SE, on Saturday from 12:00 to 12:55 p.m. The Funeral Service will be held at ST. PETER LUTHERAN CHURCH on Saturday, December 13th, 2014 at 1:00 p.m. with Reverend Barrett Scheske officiating. A Private Interment will take place in the Family Plot at Saamis Prairie View Cemetery. Memorial gifts in Herb’s memory may be made to St. Peter Lutheran Church Memorial Fund, 758 – 8th Street SE, Medicine Hat, Alberta, T1A 1M5, or to the charity of one’s choice. Condolences may be sent through www.saamis.com or to condolences@saamis.com subject heading Herb Weiss. Funeral arrangements are entrusted to SAAMIS MEMORIAL FUNERAL CHAPEL CREMATORIUM & RECEPTION CENTRE, \”The Chapel in the Park\”, locally owned and directed. Should you wish any additional information, please telephone (403)528-2599