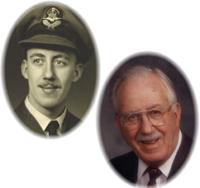 January 5, 1921- Dover, England
December 9, 2014 – Calgary, Alberta
It is with deep sadness we announce the peaceful passing of Reg Nutter at the age of 93 years. He was pre-deceased in July 2005 by his wife Hilda, whom he married on January 31, 1942. He is survived by a son Richard (Donna), a daughter Pamela, three grandchildren and four great-grandchildren. He is also survived by a brother Geoffrey (Daphne) and was predeceased by his parents Charles and Agnes Nutter and his sister, Rita Blackman (Allan), all of England. He received his early education in England and Malta. He served as a pilot with the Royal Air Force throughout the Second World War and was one of “The Few” of Battle of Britain fame. He achieved the rank of Flight Lieutenant and was awarded the Distinguished Flying Cross in 1945. He was the last surviving member of the 1940 formation of Squadron 257. While posted to Canada in 1941 as a Flying Instructor with the British Commonwealth Air Training Plan he met his future wife, Hilda Flynn, in Medicine Hat, Alberta. After discharge in 1946 he immigrated to Canada and the family settled in Medicine Hat. For many years he was employed by the Canadian Pacific Railway. He later attended the University of Alberta (Calgary) and upon graduation in 1964 joined the staff of St. Mary’s School, Medicine Hat. He remained there until his retirement in 1986. He served as Chairman of the Diocese of Calgary Pastoral Council under Bishop Paul O’Byrne for several years and was a member of both the 3rd and 4th Degrees of the Knights of Columbus.
In lieu of flowers donations may be made to the Heart and Stroke Foundation of Alberta, #100, 119 – 14 Street N.W., Calgary, Alberta T2N 1Z6. Funeral service will be held at St. Patrick’s Church, 1414 Shawnessy Blvd. SW, Calgary, at 11:00 a.m. on Tuesday, December 16, 2014. A private interment will be held in Medicine Hat on December 17, 2014. Funeral arrangements are entrusted to SAAMIS MEMORIAL FUNERAL CHAPEL CREMATORIUM & RECEPTION CENTRE, \”The Chapel in the Park\”, locally owned and directed. Should you wish any additional information, please telephone (403)528-2599