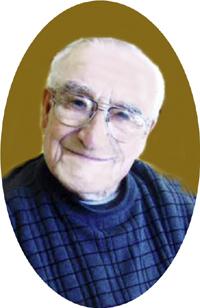 Michael “Mike” Chaykowski of Medicine Hat, beloved husband of the late Olga “Ollie” Chaykowski, passed away on Friday December 19th, 2014 at the age of 95. Mike leaves to cherish his memory two sons; Ron (Marilyn) and Michael (Karen) Chaykowski; three daughters Jackie (Richard) Frazer, Kathy (Ronald) Zollner, Pat (George) Klemen; 11 grandchildren; 13 great grandchildren and one great great-grandson; sisters Josephine, Mary and Pauline as well as numerous nieces and nephews. Mike was predeceased by his parents; his wife Ollie; a grandson Kevin Frazer; three brothers as well as three sisters. Mike was born in Cudworth Saskatchewan December 16th, 1919 to Tony and Annie. He was raised in Saskatoon SK, until he and his four siblings moved with his parents to Mildred SK to homestead where he stayed until he was 21 in December of 1940. In January of 1941 Mike enlisted in the Army and did his boot camp training in Regina, SK until he was sent up to Calgary, AB to finish out his basic training. Mike was stationed at CFB Suffield in 1942 for the rest of the war. In October of 1943 Mike married the love of his life Ollie. After the war in 1945 Mike and Ollie along with their family went back to Mildred to farm until 1950 when they returned to Medicine Hat. Mike started trucking with Robertson Transport and later worked for CP Express and Canadian Freight Ways until his retirement in 1979. Mike had a real passion for the violin and enjoyed camping at Cypress Hills as well as golfing and fishing. A private family internment will take place at Saamis Prairie View Cemetery. Those wishing to pay their respect can do so Monday December 22nd, 2014 at Saamis Memorial Funeral Chapel#1 Dunmore Rd SE from 6:00 p.m. to 8:00 p.m. The Funeral Service will be held at St. Paul Lutheran Church, 515 Sprague Way SE, on Tuesday December 23rd, 2014, at 11:00 a.m. with Pastor Ken Edel officiating. In Lieu of flowers donations may be made in Mike\’s memory to the St. Paul Lutheran Church Memorial Fund 515 Sprague Way SE Medicine Hat, Alberta T1B 4A7. Condolences may be sent through www.saamis.com or to condolences@saamis.com subject heading Mike Chaykowski. Funeral arrangements are entrusted to SAAMIS MEMORIAL FUNERAL CHAPEL CREMATORIUM & RECEPTION CENTRE, \”The Chapel in the Park\”, locally owned and directed. Should you wish any additional information, please telephone (403)528-2599