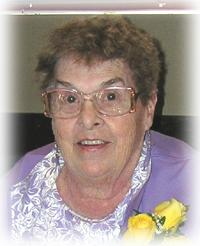 Alice Virginia Bollinger of Medicine Hat, beloved wife of the late Jack Bollinger, passed away on Wednesday, December 24th, 2014 at the age of 77. Alice leaves to cherish her memory her brothers; Lloyd “Butch” Braconnier, Cyril (Eileen) Braconnier, one sister; Lucille Edwards, sister in law; Hilda (Irish) Anton, as well as numerous nieces and nephews. Alice was predeceased by her parents, Ed and Eva; husband Jack; three brothers; Wilfred, Francis and Cecil, as well as one sister; Mary Lou. Alice was an avid bowler, who enjoyed reading, loved to play cards, and go to bingo. She was a very talented seamstress who also enjoyed doing crafts which showed in all her floral arrangements when she was a florist who owned her own shop and later worked for others. Alice was a very independent woman who knew what she wanted and was not afraid to go after it. Alice had a soft spot and a love of cats, she had cats most her life, they were like her kids. A graveside service will be held at SAAMIS PRAIRIE VIEW CEMETERY # 5160 Gershaw Dr SW on Monday December 29th, 2014 at 2:00 p.m. with Gary. W. Goran officiating. Memorial gifts in Alice\’s memory may be made to the Medicine Hat S.P.C.A. 55 Southwest Drive SW Medicine Hat, Alberta T1A 8E8. Condolences may be sent through www.saamis.com or to condolences@saamis.com subject heading Alice Bollinger. Funeral arrangements are entrusted to SAAMIS MEMORIAL FUNERAL CHAPEL CREMATORIUM & RECEPTION CENTRE, \”The Chapel in the Park\”, locally owned and directed. Should you wish any additional information, please telephone (403)528-2599