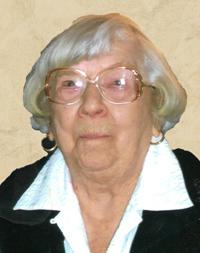 Joan Anderson of Medicine Hat, beloved wife of the late Gordon \”Red\” Anderson, passed away on Saturday, January 3rd, 2015 at the age of 95 years. Joan leaves to cherish her memory her son, Graham Anderson; Shirley Margerete Ewan (Langlands) of Calgary who owned the Piapot Hotel for many years; Malcolm Blake, Jessie and Les’ son of Vancouver; Peter and Katie Langlands; Heather and Stan Fisher, Lee-Ann and Twyla. Joan was predeceased by her good friends, Geo and Marie Oliphant. Joan was born on March 1st, 1919 in Scotland. At the age of one, she and her family immigrated to Canada and settled at Golden Prairie, Saskatchewan. As a child the family then moved to Medicine Hat where she attended school, graduating from Alexandra High School. Joan met and married Red on April 6th, 1946 and they continued to make Medicine Hat their home. She worked at “The Darling Dress Shop” until 1970 when Joan opened her own store called “Joan’s Dress Shop” retiring in 1980. She was a dedicated member of The Westminster United Church for many years as well as the Eastern Star. Joan enjoyed the company of family and friends and will be deeply missed by all those who knew and loved her. The Funeral Service will be held at SAAMIS MEMORIAL FUNERAL CHAPEL, #1 Dunmore Road SE, on Friday, January 9th, 2015 at 1:30 p.m. with Gary W. Goran officiating. A Private Interment will take place at a later date. Memorial gifts in Joan\’s memory may be made to Canadian Diabetes Association, #102, 73 – 7th Street SE, Medicine Hat, Alberta T1A 1J2. Condolences may be sent through www.saamis.com or to condolences@saamis.com subject heading Joan Anderson. Funeral arrangements are entrusted to SAAMIS MEMORIAL FUNERAL CHAPEL CREMATORIUM & RECEPTION CENTRE, \”The Chapel in the Park\”, locally owned and directed. Should you wish any additional information, please telephone (403)528-2599