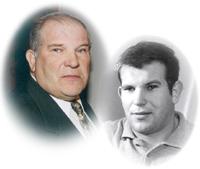 Mr. John (Jonas) Fomradas, beloved husband of the late Mrs. Diane Fomradas, passed away peacefully at the St. Joseph’s Home – Carmel Hospice on Monday, January 5, 2015, at the age of 74 years.  John was born  on March 31, 1940 in Kausnas, Lithuania.  As a young boy, he immigrated to Canada where the family first settled in Shaugnessy, Alberta before moving to Lethbridge.  This not only became his home, it was the place where he would marry his wife,  Diane Morrison and raise a family of their own.  In his younger days, John enjoyed playing soccer and broomball and met many people involved in these sports who became good friends over the years.   For over twenty years, John was a dedicated employee with Canadian Dressed Meats before he retired and opened a new chapter in his life.  At this time, he purchased a farm near Purple Springs and quickly adapted to the humble country life.  He loved the farm life of horses and other animals and could often be found at the track watching horse races.  In 2010, John and Diane moved to Medicine Hat where he had resided until the time of his passing.  Left to cherish John’s memory are his children:   Shannon (Guido) Cattoni of DeWinton, AB., Blaine (Ann Marie) Fomradas of Medicine Hat and Jody (Dave) Nelson of Calgary, AB.;  grandchildren, Holden and Taite Cattoni, Nikolaus and Dallon Fomradas  and  Hunter and McKinley Nelson as well as his mother-in-law, Jessie Morrison.  He is also survived by four brothers, one sister and their families.  He was predeceased by his wife, Diane in 2013; one brother and two sisters.  A Celebration of John’s life will be held at Cook Southland Funeral Chapel, 901 – 13 Street S.W., Medicine Hat on Friday, January 9, 2015, at 11:00 a.m. with Reverend Father John Maes officiating.  Interment will follow at Hillside Cemetery.  (Condolences may be expressed by visiting www.cooksouthland.com)  Memorial donations in John’s name may be made directly to the St. Joseph’s Home – Carmel Hospice, 156 – 3rd Street N.E., Medicine Hat, Alberta, T1A 5M1.  Honoured to serve the family is Cook Southland Funeral Chapel, 901 – 13th Street S.W. Medicine Hat, Alberta T1A 4V4 Phone 403-527-6455