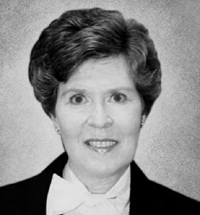 Marjory Haidar, currently of Calgary, passed away peacefully on January 10, 2015 at the age of 84 years.
Marjory was born in Medicine Hat on December 11, 1930 and moved to Calgary in 1966, where she resided until her death. Following high school Marjory entered nurses training at the Royal Jubilee Hospital in Victoria. She later received training as a public health nurse and worked for Calgary Health Services from 1966 to 1986 when she retired. Marjory and Ghulam enjoyed years of travelling including many cruises to distant ports.
She was predeceased by her husband Ghulam in 2013. She leaves behind her daughter Rifat (Khalid) Bashir and three grandchildren (Noreen, Celine and Shawn) of Calgary; her sister Helen (William) Thomson of Austin, Texas; her brother Glenn (Joyce) Morrison of Lethbridge; and seven dearly loved nieces and nephews and their families. Marjory was also predeceased by her parents Dr. J. Douglas and Mrs. Phyllis Morrison of Medicine Hat in 1970 and 1971.
Memorial Services will be held at St. James Anglican Church (6351 Ranchview Drive N.W. Calgary, AB) on Friday, January 16, 2015 at 1:00 p.m. Condolences may be forwarded through www.mcinnisandholloway.com. If friends so desire, memorial tributes can be made to the Salvation Army or the Canadian Cancer Society.
In living memory of Marjory Haidar, a tree will be planted at Fish Creek Provincial Park by McINNIS & HOLLOWAY FUNERAL HOMES, Crowfoot, 82 Crowfoot Circle N.W. CALGARY, AB. Telephone: 1-800-661-1599.