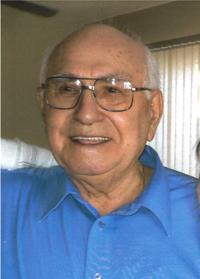 Alex Balazsi passed away peacefully at the Medicine Hat Regional Hospital at the age of 94 1/2 years. Alex, the second youngest of five children, settled in Rabbit Lake, Saskatchewan in 1929 with his family when they emigrated from Hungary. As a teenager, he worked as a farm labourer before enlisting in the Canadian Army serving proudly until his discharge in 1945. Re-entering civilian life, he worked in the coal mines of Drumheller and the hard rock mines of Uranium City. He also worked in Australia and in New Zealand on the Mana Puri Hydro Electric project. Upon returning to Canada via tramp steamer, Alex worked as a cat skinner grading in the gravel pits for the road paving crews throughout central Saskatchewan. He then worked in a veteran’s nursing home in Saskatoon until retirement. Alex married his beloved wife, Louise Balazsi in 1967 and they began a long love affair of travel overseas and on the road. Their trusty motor home would take them to southern Nevada in the winters, down the Oregon coast, up the Alaska highway, and all the way to Vancouver Island. Alex is survived by his three children, Paul James Jantzen of Surry, BC, Paulette (Blake) McCarthy of Nanaimo, BC, Robin (Richard) Smith of Edmonton, and their mother, Nellie Jaroch of Summerland, BC; his step children, Bernice (Per) Sakstad of Medicine Hat, Alvin (Lil) Stange of Claresholm, Pat (Bill) Zajac of Calgary; 11 grandchildren; 15 great- grandchildren; and 3 great-great- grandchildren; his sister, Mary Kundar of Claresholm; his sister-in-law, Hermina Balazsi of Rabbit Lake; as well as many nieces and nephews. Alex was predeceased by the love of his life, Louise Balazsi; one stepdaughter, Yvonne and her husband, Jaye Bowlen; two brothers, Joseph and John; and three sisters, Elizabeth, Helen and Julia. A Celebration of Alex’s Life will be held at CHINOOK VILLAGE, 2801 – 13th Avenue SE, on Saturday, January 17th, 2015 at 2:00 p.m. with Chaplain Lance Duncalfe and former Chaplain George Brandt, co-officiating. Interment will take place at a later date in St. Peter Lutheran Cemetery, Claresholm. In lieu of flowers, memorial gifts in Alex’s memory may be made to the charity of one’s choice. Condolences may be sent through www.saamis.com or to condolences@saamis.com subject heading Alex Balazsi. Funeral arrangements are entrusted to SAAMIS MEMORIAL FUNERAL CHAPEL CREMATORIUM & RECEPTION CENTRE, \”The Chapel in the Park\”, locally owned and directed. Should you wish any additional information, please telephone (403)528-2599