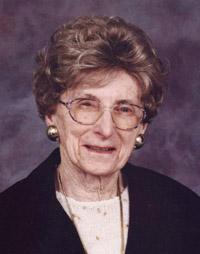 (nee AMBROSE)
Marjorie was born May 23, 1921 to Chester and Bertha Ambrose in Maple Creek. She lived in the hills until marrying Doug Boyer on April 11, 1942. Upon her marriage, she became a rancher’s wife on Doug’s farm in Broadview.
In 1959, the family, with daughters Carol and Beverley, moved to the Cypress Hills and the Ambrose ranch.
Marj was lady, wife, mother, grandmother, great-grandmother, seamstress, knitter, gardener, cook, berry preserver, volunteer, and horseback rider in the hills.  A deck of cards was always near.  She was a member of many organizations and had an avid interest in history.
She is predeceased by Doug, daughter Bev, sisters Olive, Hilda (Theodore) Sloat, and Cliff (Frankie) Boyer.
Marjorie is survived by daughter Carol (Ralph) Maier, grandchildren Bob, Joe (Mary), Gary (Jill), Lee (Mark) Jacobson, and Doug (Arlene) Drader, great-grandchildren Elan, Rayna, Joshua, Amy, Ty, Ryley, and Violet, cousins, nieces, nephews and by Ed Bath son-in-law and his family.
We, the family, would like to extend our heartfelt thanks to Cypress Lodge for their wonderful care while Marjorie was a resident. Marjorie supported many worthy causes. Donations in her memory can be made to an organization of your choice.
The funeral service was held in St. Mary\’s Anglican Church in Maple Creek, Sask. on Fri., Jan. 16, 2015 at 2 p.m. with Reverend Peter Boote and Eleanor Rockabar officiating. A private family interment took place at the Maple Creek Cemetery. Pallbearers were Mark Jacobson, Mark Drader, Bob Maier, Lynn Needham, Gary Maier, Joe Maier. Those who wish to may remember Marjorie with a donation made locally to the charity of donor\’s choice.
To email an expression of sympathy you may visit www.gonebutnotforgotten.ca.
Binkley’s Funeral Service, Maple Creek and Leader, in charge of arrangements. 306-662-2292

2 Condolences for “BOYER, MARJORIE F. A.”