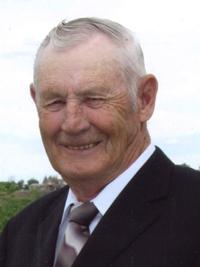 Gary Robert Cooper of Bow Island, beloved husband of the late Marcella “Lorraine” Cooper, passed away on Tuesday, January 20th, 2015, at the age of 80 years. Gary leaves to cherish his memory his children, James (Susan) Cooper and their children, Jill (Todd) Regehr and their children, Avery and Owen, Lisa (Michael) MacLeod and their son, Bennett and Kevin (Janae) Cooper, Randy Cooper and his children, Nicholas Cooper and Carson Cooper, Valerie Cooper, Kathy (Wayne) Murray and their children, Graham Murray, Jordan Murray, Kailyn Murray, Garry Cooper and his children, Rebecca Cooper and Braiden Cooper and Robert (Laurie) Cooper and their children, Nicole Cooper and Tara Cooper; one sister, Mary McNab; one sister-in-law, Marilyn (Ron) Thorson; great aunt, Margaret (Bob) Cody; as well as numerous nieces and nephews. Gary was predeceased by his wife, Lorriane on March 7th, 2003; and his parents, Thomas and Lavina Cooper. Gary married his school sweetheart, Marcella “Lorraine” Cooper in Medicine Hat on October 7th, 1954. After this, they began to farm in the Burdett/Bow Island area. A family oriented man, who was a member of the Bow Island Elks Club for 55 years and an active member of the Bow Island Curling Club, Gary enjoyed hunting, fishing, camping, dancing, curling, and playing cards. After retiring from the farm to Bow Island, Gary filled his time by having a coffee at the Burdett Fire Hall or by playing cards or shooting a game of pool at the Golden Age Club. In recent years, Gary has enjoyed playing in cribbage tournaments and attending dances all over south-eastern Alberta, as well as taking in the various activities of his grandchildren. The Funeral Service will be held at ST. ANDREW\’S UNITED CHURCH, 139 – 2nd Avenue West, Bow Island, on Saturday, January 24th, 2015 at 11:00 a.m. with Pastor Sheila McLeod officiating. Memorial gifts in Gary\’s memory may be made to Bow Island & District Health Foundation, P.O. Bag 3990, Bow Island, Alberta, T0K 0G0. Condolences may be sent through www.saamis.com or to condolences@saamis.com subject heading Gary Cooper. Funeral arrangements are entrusted to SAAMIS MEMORIAL FUNERAL CHAPEL CREMATORIUM & RECEPTION CENTRE, \”The Chapel in the Park\”, locally owned and directed. Should you wish any additional information, please telephone (403)528-2599