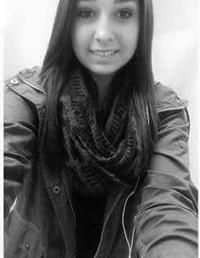 2000 ~ 2015
It is with heavy hearts that Matthew Penttila and Tanessa Marshall announce the passing of their beloved daughter, Kienna Judith Anja, on Friday, January 23, 2015, at the age of 14 years.  Kienna was born in Kamloops, B.C. on March 23, 2000, later moved to Calgary and eventually settled in Medicine Hat.  She started her illustrious education at Central Park School, attending Colonel McLeod and Nose Creek Schools in Calgary as well as St. Mary’s Catholic School in Medicine Hat.  She participated in school sports and especially enjoyed basketball, volleyball and wrestling.  In her first wrestling match, she pinned her opponent in under a minute!  She also loved to dance and her newest interest was yoga.   Kienna had faith in God from an early age.  While attending her great-grandma’s 90th birthday in Thunder Bay, she expressed a desire to be baptized in the family church.  She spoke to the minister, and with family in attendance, she and Bailey were baptized.  Kienna was an independent soul wanting to make the big leagues.  Money, travel and luxurious items were her aspirations and her biggest dream of all was to go to Paris.  If you ask anyone to describe Kienna, they would say she was always laughing, singing and dancing.  If you were feeling grumpy and Kienna walked into the room, the mood would definitely change for the better!  Family dinners were a highlight for Kienna and she would always ensure that the menu was to her satisfaction.  Most of all, there was nothing more important to Kienna than her family.  Her brother, Bailey, was her best friend, and brother, Brede, was her pillar of strength and she cherished her new baby brother, Austin.  Recently, Kienna became Auntie KK to her adorable nieces, Teraiza-Rae and Natalia-Lyn.  Kienna is survived by her mother, Tanessa Marshall and father, Matt Penttila;  brothers, Brede (Amber), Bailey and Austin.  She is also survived by her Nan and Pappy, Judy and Keith Martin;  grandfathers, Jack Penttila and Rick Marshall;   uncles Tyson, John (Sam), Rob (Nina);  auntie Sheena;  nieces, Teraiza-Rae and Natalia-Lyn;   Godmother, Lynn Murray as well as numerous cousins.  She was predeceased by her grandmother, Kathy Maki;  great-grandparents, Clara and Reino Anttonen and Nick and Anja Penttila.  A Celebration of Kienna’s life will be held at Cook Southland Funeral Chapel, 901 – 13 Street S.W., Medicine Hat on Thursday, January 29, 2015, at 11:00 a.m. with Rev. Dr. Shane Andrus officiating.  In honour of Kienna, everyone attending is encouraged to wear their moccasins.  (Condolences may be expressed by visiting www.cooksouthland.com)  If friends so desire, tributes in memory of Kienna may be made to the St. Mary’s Catholic School, 155 – 11 Street S.W., Medicine Hat, Alberta, T1A 4S2.  Honoured to serve the family is COOK SOUTHLAND Funeral Chapel, 901 – 13 Street S.W., Medicine Hat, Alberta, T1A 4V4.  Telephone:  403-527-6455.