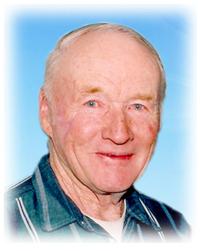 1933 ~ 2015
Mr. George Mercer passed away at the Medicine Hat Regional Hospital on Saturday, January 31, 2015, at the age of 81 years.  George was born on April 13, 1933 in Lemberg, SK. and moved to Buffalo, AB. as an infant.  He was a farmer at heart and lived on the farm at Buffalo until 2011, when he moved into Masterpiece in Medicine Hat.  George is survived by his sister, Doris (Ed) Kornelson;  brothers, Bob (Lorraine) Monkman and Jack (Audrey) Monkman;  nieces, Janet (Pat) Janzer, Wendy (Tom) Beach, Patti (Todd) Penner, Lisa Monkman, Debra (Chris) Schneider, Jennifer (Tony) Sevenko and April (Matt) Lees.  He is also survived by a nephew, Dale Monkman as well as numerous aunts, uncles and cousins.  George was predeceased by his father, Bill Mercer (1937);  step- father, Ross Monkman (1963);  mother, Rena Monkman (1985) and a nephew, Ronald Kornelson (2006).  Family wish to extend their heartfelt appreciation for the wonderful care given to George while at Masterpiece.  Special thanks also to the Doctors, nurses and staff at the Medicine Hat Regional Hospital.  A Memorial Service honouring George’s life will be held in Buffalo at a future date.  Announcements including the day and time of the celebration will be made in the days leading up to the service.  (Condolences may be expressed by visiting www.cook southland.com)  Those wishing to remember George may do so through a donation to the Alzheimer’s Society of Alberta, 401D – 3 Street S.E., Medicine Hat, Alberta, T1A 0G8 or to the Canadian Diabetes Association, 102, 73 – 7 Street S.E., Medicine Hat, Alberta, T1A 1J2.  Honoured to serve the family is COOK SOUTHLAND Funeral Chapel, 901 – 13 Street S.W., Medicine Hat, Alberta, T1A 4V4.  Telephone:  403-527-6455.