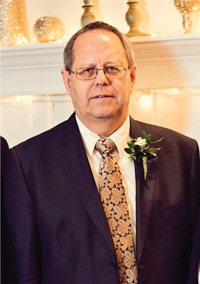 Dee Lavern Pitcher of Medicine Hat, beloved husband of Lynda Pitcher, passed away unexpectedly at his home on Saturday, March 14th, 2015 at the age of 66 years. Dee also leaves to cherish his memory his 6 children, Kristen, Brent, Kerri, Cameron, Chad (Paige) and Katie; two brothers, Leron (Sharon) Pitcher and Kent (Donna) Pitcher; one sister, Rhea (Don) Card all of Cardston, AB; as well as numerous nieces and nephews. Dee was predeceased by his parents Willis and Ethel; and two sisters, Charlene Shields and Karen Scanlon. Dee was born on November 28th, 1948 in Cardston, AB and was the youngest of six children. He graduated from Cardston High School in 1967 and served a mission for the Church of Jesus Christ of Latter Day Saints in Scotland from 1968-1970. Dee graduated from Brigham Young University in 1973 with an undergrad degree in Psychology. He met Lynda while attending B.Y.U. They got married on May 8th, 1973 in the Cardston Temple of the Church. Dee then graduated from Queens University in Kingston, ON in 1976. Lynda and Dee then made the move to Medicine Hat where he joined the firm of McLean McDonald Wiedemann & Pitcher and practiced law until a car accident in 1998 forced his retirement. Dee’s passion was soft ball. He also loved to travel, hunt, golf, and ride motorcycles and four wheelers. He was a talented wood worker and builder. Dee was a brilliant lawyer and well respected in his profession. He was a devoted husband and father; his family was everything to him. Dee was a very active member of his church, serving as a counselor in the bishopric from 2000-2001 and as Bishop of the 1st Ward in Medicine Hat from 2001-2007. The Funeral Service will be held at CHURCH OF JESUS CHRIST OF LATTER-DAY SAINTS, 7 Sierra Boulevard SW, on Saturday, March 21st, 2015, at 11:00 a.m. with Bishop Jordan Mulholland officiating. Condolences may be sent through www.saamis.com or to condolences@saamis.com subject heading Dee Pitcher. Funeral arrangements are entrusted to