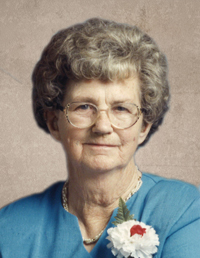 Mary Martine Walker of Medicine Hat, beloved wife of the late Erwin “Elvin” Walker, passed away on Tuesday, March 24th, 2015 at the age of 94 years. Mary leaves to cherish her memory her three daughters, Carol (Peter) Davick of Wetaskiwin, Diane (Gary) Weiss of Medicine Hat, and June (Ivan) Schick of Elkwater; ten grandchildren; twenty two great-grandchildren; four great-great-grandchildren; one brother, Vern (Sue) Andersen of Calgary; as well as numerous nieces and nephews. Mary was predeceased by her husband, Elvin; her parents, Jim and Marianne Andersen; one brother, Ron (Mary) Andersen; her in-laws, Ralph (Martha) Walker, Ed (Martha) Walker, Martha (Charles) Angle, Frieda (Andrew) Stickel and Esther (Ben) Sulz. Mary was born on July 21st, 1920 in Thisted per Arden, Denmark. She immigrated to Canada in 1928 with her family and settled at Sceptre, Saskatchewan. Mary attended and graduated from St. Angela’s at Prelate, Saskatchewan, she then attended normal school in Calgary and graduated with a teaching certificate. Mary taught at Ehman School, Maple Tree School and lastly Echodale School northwest of Hilda in 1943-1948 and she was a substitute teacher at Hilda for many years. She met Elvin while she was teaching in the Hilda district in 1945 and they were married on July 3rd, 1947 in Medicine Hat. They made their home on the family homestead northwest of Hilda until retirement to Medicine Hat in December of 1996. Mary was an avid reader, gardener, cook and baker, loved music and the company of family and friends. She will missed by all those who knew and loved her. The Funeral Service will be held at SAAMIS MEMORIAL FUNERAL CHAPEL, on Monday, March 30th, 2015 at 11:00 p.m. with Pastor Bob Findley officiating. Interment will follow at Saamis Prairie View Cemetery. Memorial gifts in Mary’s memory may be made to the Charity of One’s Choice. Condolences may be sent through www.saamis.com or to condolences@saamis.com subject heading Mary Walker. Funeral arrangements are entrusted to