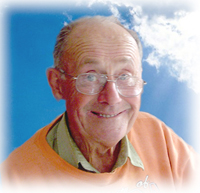 John Van Dam passed away at the Medicine Hat Regional Hospital on Wednesday, March 25, 2015, at the age of 80 years. John lived the first eighteen years of his life in Monster, Holland, graduating High School there. He immigrated to Canada in 1951, with his parents and seven siblings on the Castle Bianco. The family settled in Picture Butte, Alberta, where they lived in a 1 room shack in the middle of a farmer’s field; then Taber and in 1953, Redcliff. All of the oldest boys, including John, took on jobs working in the sugar beet fields to help support the family. In Redcliff, John went to work for Dominion Glass and built a hobby greenhouse to grow vegetables. He eventually partnered with his older brother and built a large commercial greenhouse in Redcliff. They became founding members of the Red Hat Co-op. In 1968, he purchased Riverview Greenhouses in Medicine Hat and continued to operate the business until his retirement in 1992. His favorite hobby was raising great-danes and he often had them accompany him on his hikes in the Cypress Hills and beyond. Over his life, John raised over 10 danes. His other hobbies included painting and growing a market garden. John was involved for many years in musical theatre and he was a lifelong Barbershop singer, both in Medicine Hat and Florida where he delighted in spending all of his winters. In the last few years of his life, John worked towards realizing his dream of a butterfly house in Alberta. The Butterfly House in the Windmill Greenhouse opened in 2012. John was predeceased by his parents as well as two brothers, John and Adrian. He is survived by 4 brothers, Jim (Helen), Bill (Winnie), Alfred (Norma) and Art; one sister, Joanne (Ralph) as well as many nieces, nephews and sisters-in-law, Olga and Kathleen. A Celebration of John’s life will be held at Cook Southland Funeral Chapel, 901 – 13 Street S.W., Medicine Hat on Tuesday, March 31, 2015, at 2:00 p.m. with Life Celebrant Gerry Getz officiating. A time of fellowship will follow immediately thereafter in the Cook Southland Reception Facility. (Condolences may be expressed by visiting www.cooksouthland.com) Flowers are gratefully declined. Those wishing to remember John may do so through a donation to the Medicine Hat SPCA, 55 Southwest Drive S.W., Medicine Hat, Alberta, T1A 8E8. Honoured to serve the family is