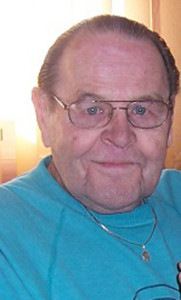 Albert Reinheller of Medicine Hat, died on March 20th, 2015 at the age of 85 years. Albert was born in his parent’s farmhouse near Richmound, Saskatchewan on April 7th, 1929 to the late Martin and Sophie Reinheller. Albert is survived by his big brother, Ben (Esther) and his beautiful sisters, Julia (late Fred), Katie (late Nelson), Irene (late Ray) and Lavina (Bill). Albert will be dearly missed by his precious children, Lee (Corili), Lyle, Della (Carmon), and Angela (Brad). He is survived by seven grandchildren, Char (Mike), Amber (John), Justin, Jennifer (Charles), Kristy, Jessica (Eric), and Savanna; and six great-grandchildren, Karleigh, Addison, Melody, Ben, Alize, and Bishop. Albert told many stories to his children over the years about his farming days in Saskatchewan, his joys of Richmound Sports Days, playing baseball, horseshoes, his many adventurous times on the farm with his siblings, working at the beef plant in Medicine Hat and then with the City Parks Department from which he eventually retired. Albert and Eileen very much enjoyed camping, travelling to the States in their motor home, their trip to Hawaii, making sausage and homemade noodles. Albert was loved. He enjoyed life. He had good friends. He was proud of his famous “hole in one” and even prouder to be a member of the Moose and the Legion. He was witty beyond imagine and sharp as a tack. His heart was bigger than most and it didn’t take much for his beautiful baby blue eyes to fill with tears when talking about those that meant so much to him. He loved his house, his beer, his German dishes from Oly’s and his Blue Jays. Every spring Albert would patiently wait for the arrival of the wrens to return from the south to greet him on his back deck. Dear Albert, you will be missed. A Private Family Celebration of Life is being held. Condolences may be sent through www.saamis.com or to condolences@saamis.com subject heading Albert Reinheller. Arrangements are entrusted to SAAMIS MEMORIAL FUNERAL CHAPEL CREMATORIUM & RECEPTION CENTRE, “The Chapel in the Park”, locally owned and directed. Should you wish any additional information, please telephone (403)528-2599