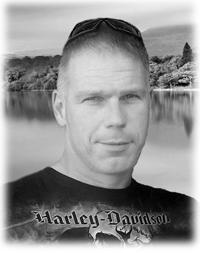 Winston “Winny” Ross Giesbrecht passed away at the Foothills Hospital in Calgary on Friday, March 27, 2015, at the age of 44, with his family and friends at his side. Winston leaves to cherish his memory his beloved girlfriend, Carrie Larson and her daughter, Kaylee; parents, William and Evelyn Giesbrecht; brother, Eugene and his children, Jordan and Sydnee; sister, Laure (Ernie) Speers and their children, Paige and Steven; brother, Leander (Jody) and their baby, Zander as well as his beloved dog, Taz. Winston is also survived by Carrie’s family including her parents, Duane and Sandra Graham; brother, Robert (Bree) Graham and grandmother, Shirley Graham. He was predeceased by his grandparents on both sides, two cousins and five aunts and uncles. Winston will be missed and remembered by all his family and friends for his infectious laughter and fun loving personality. He was born in Swift Current, SK. on June 3, 1970, the first child of William and Evelyn Giesbrecht. Winston grew up on a farm near Herbert, SK. graduating from Swift Current Comprehensive High School. After graduation, Winston joined the military spending a total of 6 years active service which included time with the RECCE. Following his service in the military, Winston started his transportation and oilfield career which evolved into his last position at Millennium Stimulation Services as a Frac Supervisor. Those wishing to pay their respects may do so starting one hour prior to the Celebration of Winston’s life which will be held at Cook Southland Funeral Chapel, 901 – 13 Street S.W., Medicine Hat on Thursday, April 2, 2015, at 2:00 p.m. with Pastor Mark Bolender officiating. Interment will follow at the Redcliff Cemetery. In lieu of flowers, donations in memory of Winston may be made towards a trust fund for Kaylee Larson at the RBC, Crestwood Branch, 2901 – 13 Avenue S.E., Medicine Hat, AB., T1A 3R1 or to the Medicine Hat and District Food Bank, 532 South Railway Street S.E., Medicine Hat, AB., T1A 2V6. (Condolences may be expressed by visiting www.cooksouthland.com) Honoured to serve the family is COOK SOUTHLAND Funeral Chapel, 901 – 13 Street S.W., Medicine Hat, Alberta, T1A 4V4. Telephone: 403-527-6455.

One Condolence for “WINSTON GIESBRECHT”