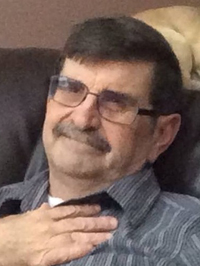 Allison “Al” Wayne Durkee, beloved husband of Mary Durkee of Medicine Hat, passed away on Sunday, April 5th, 2015 at the age of 67 years. Al also leaves to cherish his memory six children, Wayne (Catherine) Durkee, Troy (Carrie) Durkee, James (Corrie) Ellis, Dale (Sarah) Ellis, Heidi (Jon) Durkee, and Joshua Durkee; eight grandchildren, Jesse, Sebastian, Austin, Olivia, Brett, Turner, Cody and Alexis; three brothers, Larry (Betty), Mark (Bonnie), and Neil (Maureen); as well as numerous nieces and nephews. Al was predeceased by his parents, Douglas and Hilda Durkee; two brothers, Alvin and Cliff Durkee; two brothers-in-law, David and Sonny Smith; and his mother and father-in-law, John and Mary Smith. Al worked for the CPR for seventeen years and then drove truck for Hurlburt Construction for over twenty years. Most recently, he had been employed with Lawrence Meier Trucking for the past seven years. Al was a true blue Maple Leafs fan and had a passion for trains and railroads. He was a man with a very large heart and will be greatly missed and lovingly remembered by all of his family and friends. The Funeral Service will be held at SAAMIS MEMORIAL FUNERAL CHAPEL, #1 Dunmore Road SE, on Saturday, April 11th, 2015 at 10:00 a.m. with Gary W. Goran officiating. Memorial gifts in Al’s memory may be made at the ScotiaBank on Dunmore Road SE to assist with funeral expenses. Condolences may be sent through www.saamis.com or to condolences@saamis.com subject heading Al Durkee. Funeral arrangements are entrusted to