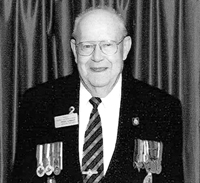 It is with heavy hearts we announce the passing of Hugh Finley McPherson on Monday, April 6th at the age of 89 years.

Fin grew up on the family farm in Hardesty, Alberta until he joined the military in 1942 where he served in World War II (Holland) until the war was over. After returning from service he met and married Melba McAndrews in 1949. Fin and Melba moved to Lethbridge followed by Vulcan for three years until settling in Medicine Hat in 1958 where they raised their family.

Fin worked for Alberta Government Telephone for thirty-five years and moved to Calgary in 1972 where he retired in 1985. He was also involved with and volunteered with the MS Society. Fin was a life member of the Legion and a very dedicated member of the Honorary Color Party. He was very proud to be a part of this. He made many friends over the years being a part of the Legion. He loved to travel and wherever he went he made a point of finding a Legion to visit. Fin had a very large collection of pins he collected over the years from all the legions he visited across Canada.

Fin is very much loved and will be missed by all those who had the opportunity to get to know him.