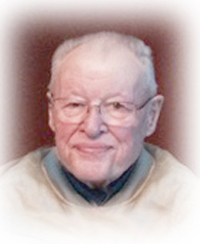 Dennis Allan Kosolofski of Medicine Hat, beloved husband of the late Adeline Kosolofski, passed away on Sunday, April 12, 2015, at the age of 87 years after a short but courageous battle with cancer. Dennis leaves to cherish his memory one son, Delbert (Leanne); two daughters, Debbie Kosolofski and Kim (Bill) Gill; daughter-in-law, Arlene Kosolofski and their families. He was predeceased by his wife, Adeline, in June of 2009 and one son, Ronald, in May of 2008. Dennis was born in Rosetown, SK. to Dan and Barbara (Hammel) Kosolofski. His family later moved to the Prelate area where he met and married Adeline Charnetski on November 1, 1951. Dennis loved playing Bridge 2 – 3 times per week where he made some of his best friends in his golden years. He was a caring father, grandfather and now great-grandfather who loved to teach the art of card playing, always playing fair but somehow winning nearly every game. A Celebration of Dennis’ life will be held at Cookâ€ˆSouthland Funeral Chapel, 901 – 13 Street S.W., on Wednesday, April 15, 2015, at 2:00 p.m. with Life Celebrant Gerry Getz officiating. Private Interment will take place at a later date at the Prelate Cemetery. Memorial gifts in Dennis’ memory may be made to Canadian Diabetes Association, 102, 73 – 7 Street S.E., Medicine Hat, Alberta, T1A 1J2. (Condolences may be expressed by visiting www.cook southland.com) Honoured to serve the family is