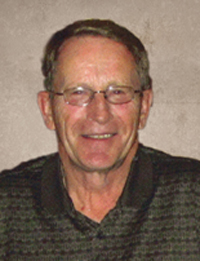 The productive life of Kenneth Dale Meek has come to a close after a brave journey with pulmonary fibrosis. Dear father to Sheryl (Rick) and Todd (Lisa), loving grandfather to Brett, Lauren, Anita, Garrett and Deion. Brother to Vern (Dora), Shirley and Ron (Thelma), husband to Iowna and then to Patricia. Beloved uncle and cousin of many, Ken’s greatest love was always family with many friends of great importance too. He was born in Nipawin, Saskatchewan on April 18, 1939 to Edith and Stan. As a precocious preschooler, he developed a love of cooking from time spent with his mom in the kitchen and also counted cribs for his proud father’s card games. Building and flying model planes and woodworking were also hobbies as a youth. Always a scholar, he was twice invited to be a class valedictorian and in 1961 graduated with a Bachelor of Engineering degree with distinction from the University of Saskatchewan in Saskatoon. He was a Royal Officer’s Training Plan (ROTP) enrollee at Greenwood, Nova Scotia from 1961 to 1964 where he was a navigator for the Anti-Submarine Warfare Air Patrol of the Atlantic coast. When the soviets aimed their missiles at the United States from Cuba, he sat with his hand on the phone, ready to be called to active duty. He was promoted to Flight Lieutenant at age 24, an honour and trust not often given to such a young man by the Canadian Air Force. Ken’s career was as an engineer with Atomic Energy of Canada Limited (AECL), at Pinawa, Manitoba. His most memorable position there was as a design engineer working with innovation in fuel cells for nuclear reactors. His love of sports included hockey, ball, golf, curling, football, skiing and hunting, including bow hunting. He curled in Nipawin’s first auto spiel as a fourteen year old. He enjoyed coaching and refereeing hockey and his time as a referee extended over a twenty year period. He was an active participant in the development of the second nine holes in Pinawa’s picturesque golf course. In later years he loved nothing better than spending time on a lake in his Lund fishing boat with his aging, but well cared for, motor purring beneath him as he sought out every corner of the lake for the best catch of trout or pickerel. The leafcutter bee business which provided pollination services for local farmers was another endeavour. On a different note he was once quartermaster for a northern survival school and was responsible for the wellbeing of the group in terms of food rations and shelter in extreme winter conditions. He had many a tale to tell of such experiences when his good memory and keen wit entertained family and friends alike. Ken was always fascinated by airplanes. He earned his flying licence and enjoyed sharing three different planes with two good friends. He and Iowna, Sheryl and Todd often flew to visit family and once took a Christmas trip to Florida. Travel was on the agenda for Pat and Ken too with several cruises and a trip over the Alaska Highway to the Yukon with their RV. Their home in Mesa, AZ was always a winter destination. Ken is also survived by Pat’s family; her sisters Shirley Muri and Carol Ferguson and her children Stuart (Susan), Sheelagh (Dwayne), Sean (Tammy), and Melissa (Scott) and their children and grandchildren. A Celebration of Life service will be held at the MEDICINE HAT LODGE, 1051 Ross Glen Drive SE, on Saturday, April 18, 1015 at 2:00 p.m. In lieu of flowers donations may be sent to The Canadian Pulmonary Fibrosis Foundation, 47 Squire Bakers Lane, Markham, Ontario, L3P 3G8. Condolences may be sent through www.saamis.com or to condolences@saamis.com subject heading Ken Meek. Funeral arrangements are entrusted to

One Condolence for “KEN MEEK”