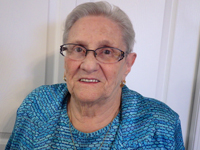 Elsie Schneider of Medicine Hat, beloved wife for 63 years of the late Clarence Schneider, passed away on Tuesday, April 14th, 2015 at the age of 87 years. Elsie leaves to mourn her children, Randy (Marlene) Schneider of Medicine Hat, Lindell (Jack) Barton of Grande Prairie, and Tyrone (Esther) Schneider of Calgary; three grandchildren, Dawn (Dan) Curle, Monty Schneider and Brett Schneider; two great-grandchildren, Jackson and Avery Curle; one sister, Tillie Martin; numerous nieces and nephews; and Dawn Resch who was like a granddaughter to Elsie. Elsie was predeceased by her husband, Clarence; her parents, Emmanuel and Louise Gomke; three brothers, Edward, Bill and Henry; and three sisters, Olga, Edith and Emma. Elsie was born on December 21st, 1927 in Schuler where she grew up. She worked at the Crystal Dairy before marrying Clarence in 1948. They farmed in Irvine for 27 years before retiring to Medicine Hat. Elsie worked hard to provide a loving home for her family. Her greatest joy was to have family and friends around the kitchen table eating her many special dishes and enjoying what she had cooked. She and Clarence had an active social life playing cards, dancing, visiting and entertaining friends. She loved being with her family, especially her grandchildren and great-grandchildren. She was so proud of all of them and treasured all of her time with them. When Clarence and Elsie moved from their home to Chinook Village they became active members of a new family. This family became a huge support to Elsie after Clarence passed away. Elsie will be so dearly missed and lovingly remembered by her family. The Funeral Service will be held at SAAMIS MEMORIAL FUNERAL CHAPEL, #1 Dunmore Road SE, on Tuesday, April 21st, 2015 at 1:30 p.m. with Pastor Lance Duncalfe officiating. A Private Interment will follow at Hillside Cemetery. Memorial gifts in Elsie’s memory may be made to the Alberta Heart & Stroke Foundation, #124, 430 – 6th Avenue SE, Medicine Hat, Alberta, T1A 2S8. Condolences may be sent through www.saamis.com or to condolences@saamis.com subject heading Elsie Schneider. Funeral arrangements are entrusted to